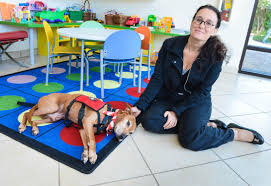 Rita Niro found a stray pit bull in Sarasota she named Red. The dog comforted child sexual assault victims, but that wasn’t his only purpose in life.

The mangy dog was found wandering the street, the scars on his side revealing an unspeakable past.

Not that Rita Niro was afraid. She had a soft spot for strays, even pit bull strays. She took the dog home, found him to be gentle, named him Red, and the next thing anyone knew he was a therapy dog for children who had been sexually assaulted.

assistant state attorney Dawn Buff once remembered. She was 9 and had been abused by her stepfather. She wouldn’t talk about it during deposition time. She was afraid. Buff told her Red was afraid, too. Of elevators.

“He’s afraid of the elevator, but he came because he knew you were going to have to talk about this today,” Buff said to the girl. “He came to be by you. He knew you needed him.”

Buff nearly cried when the girl rose from her chair, hugged Red, snuggled up next to him and said just enough to send her stepfather to prison for life.

Red was such an asset to the State Attorney’s Office that he would sit under witness stands in courtrooms, shielded from the jury, and children would touch him as they testified. There was just something comforting about him. The years passed and Red grew older. He became blind and deaf and walked like an arthritic kangaroo. But he still hobbled around the neighborhood on jaunts with Rita. They lived in the Forest Lakes area of Sarasota, on a circle. They’d go by the dog park, to the gates at the pool, and maybe he’d sniff a few mailboxes for good measure on the way back. Rita may have had to feed Red treats to keep him moving, but that was OK. Rita was moving, too.

Rita was diagnosed with ovarian cancer a few years back, not that she ever let on. Chemo took her hair, forcing her into a wig she hated. Red gave her the courage to stop wearing it on their walks, and it wasn’t long before neighbors began telling her how beautiful she looked without it. It was almost like Red knew.

One day, when Rita was in the hospital, her friend Anne Middleton took Red to the dog park. She shot a video of him chasing an English bulldog, and for one brief moment he moved like a puppy again. Middleton showed the clip to Rita in the hospital, and her face lit up for perhaps the last time it ever would.

Red was by her side.

But he wasn’t done. Not yet. He still had work to do.

Rita lived with her mother, Connie, who was distraught from losing her 53-year-old daughter. It was Red who eventually brought her out of the house, back into the world, made things seem just a little less painful. They would walk together, taking the same route Rita did with Red. “When Rita passed, he thought, ‘OK, my next job is Connie,’” said Middleton. ”‘I’m going to take care of her. This is what I was meant to do.’

“He pulled Connie back into society whether she wanted to go back out or not. He forced her to be around people and let them comfort her.”

Finally, Red’s work was over. The matted pit bull once found wandering along Proctor Road with scars on his side, the dog no one wanted who would go on to comfort child sexual assault victims, not to mention the woman who brought him home, passed away on Sept. 26. It was kidney failure. Same as Rita.

Middleton has learned things about her friend since she passed. She was once a belly dancer, played musical instruments, wrote a book about Red for her kindergarten class at Palmetto Elementary. Not all of the kids knew English. The book had lessons, all through the perspective of Red. They have to learn things, just like he did, and if they feel different, it’s OK. Red was different, too.

Middleton plans to honor Rita and Red with a Halloween walk for the residents of their neighborhood. She is hoping everyone gets out, talks, and maybe learns something about their neighbor. Outside donations can be made to Satchel’s Last Resort animal shelter, or to the fight against ovarian cancer.

“That way Red and Rita’s legacy kind of continues,” Middleton said. “That’s really what this is all about, right? Making this world a better place to be?”