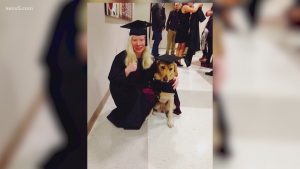 A Lyft driver was banned from the app after allegedly refusing a blind woman a ride over her guide dog, Lyft confirmed to KENS 5 on Sunday.

Melissa Padron said she was trying to run an errand earlier this week and instead of taking the bus, she decided to schedule a Lyft so that her guide dog, Cameo, wouldn’t have to bear the heat.

“I opened (the truck door) and he he says, ‘stop, I don’t have a license for dog,'” Padron recalled. “And it didn’t click. At first I was like, ‘Huh?’ And he said, again, ‘I don’t have license for dog.’ And so that was when I started recording.”

KENS 5 reached out to Lyft, which sent the following statement:

“There is no place for any form of discrimination on our platform. Lyft has a strict Service Animal policy that requires all drivers to accommodate passengers traveling with service animals, and we take any allegation of this nature very seriously. We have permanently removed the driver from Lyft and have been in touch with the rider.”

“I just want to lead as normal of a life as every other sighted person who can drive,” Padron said. “You know, I just wanted to run a quick five minute errand. If I could drive, I can just hop in my car, drive to my location, run my 5 minute errand and come back. Instead, I had to wait fifteen minutes for this Lyft ride.  I had to get humiliated and discriminated against because I choose to use a service dog who enables me to be independent, and then had to go through the whole complaint process.”

Padron said she’s blatantly been refused service on at least one other occasion because of her guide dog. She added that her and her fiancee’s visual impairments have made for uncomfortable experiences and have drawn rude comments.

Padron said it’s important for people to speak up if they are ever subject to discrimination.