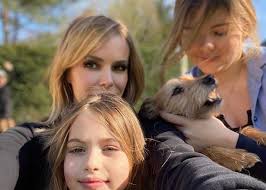 AMANDA Holden has revealed her rescue dog has saved her worried family during lockdown.

The Britain’s Got Talent judge says she is extremely grateful to pet Rudi over the past 10 weeks.

It comes as 75% of Brits say their pet is helping them cope during the coronavirus crisis, according to Battersea Dogs and Cats Home.

Battersea ambassador Amanda said: “I’m not sure what our family would have done without our rescue pets while we’ve been in lockdown.

“They cheer us up every day, they give us a routine to focus on when we’re feeling overwhelmed.

“They make the kids laugh when they’re finding it hard and missing their friends.”

More than 1,000 people submitted video clips and pictures of their rescue dogs and cats brightening up their lockdown lives for Battersea’s new Rescues to the Rescue advert.

Midwife Chelsea said her Battersea dog Percy helped her cope with the stress of being a frontline NHS worker.

She said: “Percy just takes all that stress away as soon as you walk through the door.

“He makes us laugh every day such as developing his own routine while we are trying to exercise with Joe Wicks.

“He’s our knight in shining armour.”

Naomi Hannah, 43, of south-west London, revealed her Battersea pet Potato has been like a therapy dog to her children.

She said: “My stepson has special needs and it’s been hard for him to adjust to what’s been going on, but Potato has been great for him.”

Paul said: “I can always rely on them to put a smile on my face, no matter how bleak the news is.

“They’ve made my life a bit brighter while I’ve been in isolation and I’m thankful for that.”

Last year Battersea helped over 5,000 animals across its three centres.

However, like all charities, Battersea is facing a significant drop in income due to the coronavirus crisis.

The charity’s rehoming manager Becky MacIver, said: “There are so many rescue dogs and cats helping their owners right now – and many more who are still waiting for their chance in rescue centres across the UK.

“Now more than ever, Battersea needs support to help us be here for every dog and cat that needs us.”