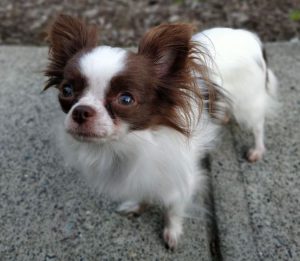 After six days of frustration and anxiety, a Surrey family has been reunited with their dog, all thanks to an anonymous tip.

Rob Alton says his dog, Tres, was likely stolen last week after he had let it outside his Fleetwood townhome.

He says witnesses saw two people chasing the 4-pound Chihuahua down an alley, and one of them had Tres tucked under their arm as they left.

Alton says there was no trace of the pooch until Wednesday afternoon, when someone sent him a text, saying they knew where the dog was.

“We got an anonymous text message with the address where my dog was, to hurry, that he was being potentially being resold and moved, and a picture of him,” says Alton. “In the picture he looked quite scared, when he’s scared or nervous his mouth is open and his eyes get a little weird.”

He says he rushed to the house, which was only about 20 blocks away, then called the police.

“They attended as well and my dog was there, and it wasn’t too hard of a process to get him back because he’s so unique looking.”

Alton doesn’t know who sent the text, but says they were instrumental in making sure his dog made it back home.

“I don’t know if they are room-mates in the house, or neighbours, but they were aware of what was going on, and they wanted to make sure Tres came home instead of being sold off to wherever,” he says.

He says the person caught with the dog told police they had purchased it from a friend for $500, and it doesn’t look like they will be punished.

“As the police were concerned, they just want to close the case with a happy ending and not have to go any further,” says Alton.

He says since the dog’s return, it’s been an emotional day, especially for his wife.

“As a surprise, I picked up Tres and took him straight to her work and she was crying for probably about 10 minutes,” he says. “He’s very much a member of the family.”

While Tres is not a registered therapy dog, Alton says he provides emotional support for his children, including his son, who struggles with anxiety and stress.

He says while this has been tough on his family, he can’t imagine what it was like for little Tres.

“God knows he went through the last six days, you know, if he could only talk.”