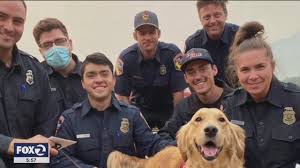 Firefighters battling wildfires in Northern California have an unusual friend to help keep their spirits up.

Her name is Kerith. She is a two-year-old golden retriever who recently returned home to San Rafael after working the Creek Fire near Fresno.

Before that, Kerith and her owner were up at the Woodward Fire near Pt. Reyes displaying her special talent for helping front-line firefighters cope through these hard times.

“You go through a dark smoky day where you don’t get to see any sunlight. It’s people’s worst days. Kerith shows up with that sunlight. It really rubs off,” says San Rafael fire engineer Jimmy Alvarez.

Kerith is a licensed therapy dog. She started going to hospitals, then fire stations. Now Cal Fire calls and requests her to come to base camps where firefighters have firefighters are coming back from or heading to the fire lines.

“It just gives them a chance to be present in the now and not think about all the stress they are about to endure while they are fighting the fires,” says Kerith’s owner Heidi Carman.

Kerith was first trained as a guide dog for the blind. But her skill set seemed to lean more toward therapy.

Carman says Kerith has a certain knack even other friendly dogs don’t quite possess.

“She knows how to be quiet and present with someone who is having a hard day. And she will just sit with them and let them be with her,” says Carman.

That seems to be a morale booster for firefighters.

“She does this thing where sits down, especially with firefighters, she’ll sit on their feet, flip her head and look straight into the firefighter’s eyes. Numerous times the firefighter will say, ‘Kerith is looking into my soul,'” says Carman.

Kerith is taking a break from breathing all that smoke.  She and Carman are volunteers. But Carman says they will be back in action as soon as Cal Fire calls.

“It kind of reboots you. Charges those batteries. Reminding you there is still happiness out there,” says Alvarez.