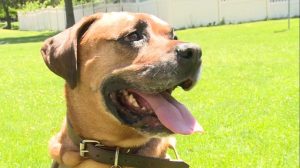 He’s not your typical war veteran, but Loki’s family says he is a hero.

Loki is a dog. The 12-year-old boxer and rottweiler mix was a military police dog who served two tours in Afghanistan and now is retired, but he continues to give back.

“We didn’t want him to retire and get depressed,” Tina Rockenbach, Loki’s new owner said.

Loki came to live with the Rockenbach’s in February. His previous owner, who was also his partner in the military needed a new service dog and was hoping Loki could retire, spending the rest of his days sunbathing and playing with Rockenbach’s kids.

But Loki had other ideas.

This isn’t the only time. Once, when Loki was at the vet, he wouldn’t leave until he greeted a man in the waiting room. Loki placed his head on the man’s lap.

Later, Rockenbach learned that man was a veteran.

“He just has this connection to them that I can’t understand but I can see,” she said.

So Loki is now in training to get his therapy dog certificate. He’s already trained well in commands and has no behavioral concerns, which make him the perfect candidate.

Once that’s done, he’ll visit veterans weekly at care facilities in the area.

“It’s just a gift we can give back to them,” Rockenbach said.

Because Loki knows all too well what it’s like to serve. He’s even earned a Purple Heart.

“”He had alerted to a landmine and went to check it out and someone remote detonated it, he jumped and pushed James out of the way and took the bulk of the blast,” Rockenbach said.

James, who is Loki’s former partner and owner survived the blast and so did Loki. Though he still has scars on his chest.

Tina believes, Loki has some PTSD because of incidents like this.

She says during thunderstorms and fireworks, sometimes Loki is who needs the comforting. But she said it’s all worth it.

“Ironically I think he’s done more for us than anything,” Rockenbach said.