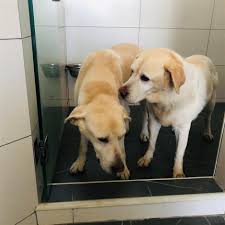 After many years of faithful service, two aging guide dogs who have been waiting four years for warm-hearted owners to take care of them in their twilight years finally have a home.

The life span of Labradors is about 14 to 15 years, affecting the decision of adoption for most.

“I have a very complicated feeling,” Zhang told Shanghai Daily at the school in Lingang area. “I am very excited and happy to adopt Ta Zhang, but I am very frightened when thinking of his approaching departure given his age.”

Fang Yun (female) and Ta Zhang (male) are both 14-year-old Labradors, and both have assisted visually impaired people for almost a decade. Since their retirement, they had been waiting nearly four years for someone to adopt them.

They were among the first batch of guide dogs which started service in Shanghai back in 2008. Some of these dogs remain with their service persons; others have died. Only Fang Yun and Ta Zhang were without homes.

Adoption agreements were signed on Sunday at the school. “It is very different from raising a pet and I struggled psychologically for a long time over the adoption decision because I know I am the person to accompany him to spend the last moment of his life,” said Zhang.

“It will be hard to say goodbye when we have a very deep bond,” he added. Zhang rescues a number of stray dogs.

“Company is the most important thing for Ta Zhang, and he appreciates it when I touch him,” he said. “Other pet dogs and cats have a lot of attention and care, which are taken for granted, but guide dogs like Ta Zhang devote most of their life to humans, and nobody cares for them after they retire. It is a pity.

“I was in tears when I learnt he needed adopting and saw his photos. “I feel very sad because they deserve love and care and they should not be forgotten after loyally fulfilling their duties.” Zhang is starting up his own business in advertising in Ningbo City, neighboring Zhejiang Province. He said he has a flexible schedule. “I will take Ta Zhang to my work place and accompany him 24 hours,” he said. The working studio also has a garden for Ta Zhang.

“As a work dog, Ta Zhang is not as vigorous and active as pet dogs and he tends to be quieter,” he said.

“I will give him care and love in the last period of his life and makes him happy.”

Fang Yun has been adopted by 33-year-old Shanghai resident Alex Liao. It was his second visit to the school.

“When I read the adoption news, it touched my heart,” Liao recalled.

“Fang Yun served people most of her life, now, I want to give her a family and makes her happy and enjoy her final days.”

Liao said he was moved by the life of guide dogs.

“l know she will have many problems as an aging dog and her remaining days are counting down, but I am fully prepared for anything as the adoption decision was not made out of impulse,” he said.

“I will treat Fang Yun like a family member.”

Liao said he would take Fang Yun to work in Baoshan District.

“Our company colleagues love dogs as well and Fang Yun needs company all the time,” he said.

At night, Liao said he will take Fang Yun back home.

“I am a very sensitive person and I think I will cry when she departs, but it will not affect my decision to adopt,” said Liao.

“I am more determined when seeing Fang Yun and I will take good care of her.

“Fang Yun has a very mild temper and she can not walk fast like young dogs due to aging. I will hold her when climbing stairs and take her for a short outings on weekends if her health permits.”

Zhu Jun, a guide dog training teacher at the school, had mixed feelings about the adoptions.

“It is a departure for me and I am sad,” he said. “But I am happy they will have a warm home at the same time. The adopters have a good family environment and a strong sense of responsibility. They will care for Ta Zhang and Fang Yun from the heart, which made me relieved.

“I told them the eating habits and schedules of the duo in detail and we will keep contact with them over the remainder of their lives in their new homes.”

He said the school had received many gifts from warm hearted people for Fang Yun and Ta Zhang, including food, beds and other products.

The owners of Fang Yun and Ta Zhang could not accommodate them after they retired. Their days at the school were mostly spent resting.

Fang Yun served a visually impaired person for eight years until he started moving slower when clambering up stairs and became short of breath when walking. With these health problems, he was taken out of service.

Ta Zhang was also retired due to age and poor health. Most retired guide dogs are either fostered by their service persons, adopted by the families who assist in their training, or return to training centers for adoption, said Zhu.

There are currently 37 guide dogs in service in Shanghai, and there are dogs retiring every year. Guide dogs serve as “eyes” for the blind. About 45 days after birth at training bases, they are placed with families who acclimatize them to domestic life and interaction with humans. When they are 1 year old, they return to training centers, where they receive four to six months of professional training. They need to pass a series of exams before they are allowed to start work. Eight guide dogs are being trained at the school at present.