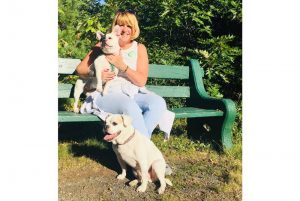 Jo-Ann Roberts is the interim leader for the Green Party of Canada and a resident of Halifax. Roberts has endless positive energy, an engaging laugh, and she genuinely cares about people. She works 12 to 14 hours a day, dedicating all of her initiatives to making communities better for families. Roberts is married to Ken, and they raised four terrific children: Christopher, Claire, Alyson and Meghan.

A little known fact about Roberts is that she has a deep love and respect for animals. Her affinity for animals started in her childhood, and her devotion to them has not diminished.

When her children were young, Roberts dearly wanted to add a dog to the family, but her four-year-old daughter Alyson was fearful of dogs. Alyson would hold her breath when she saw a dog. Friends kept suggesting they get a dog to help her young daughter, but Roberts was reluctant until the best possible dog came along. Friends informed Roberts about a dog at the New Brunswick SPCA that might be a good fit, considering the circumstances.

The dog arrived at the SPCA from an abuse seizure. The dog was chained outside, and the shelter discovered she was pregnant after the seizure. The puppies were quickly adopted, but the mother dog remained at the shelter, waiting for adoption.

The Roberts family went to meet the dog.

Roberts said,” It was a scene from one of those Chevy Chase movies as we had a large brown station wagon, wooden panels included. We pulled up to the SPCA, parents in the front seat and children riding in the backseat! All we were missing was the luggage on a roof rack!”

The family met the sweet mother dog, and Roberts recalls the little dog won over her fearful daughter immediately. They took Frosty home for the weekend, and she never returned to the shelter. Frosty became a loving, cherished and valued member of the Roberts family.

Roberts’s daughter, Alyson, currently owns a deaf dog, and the dog owned by her daughter, Meghan has passed the Therapy Dog program. All of Roberts’ children are responsible, animal owners.

Roberts and her husband are now empty-nesters, and although they frequently talk about getting a dog, they just can’t at this time. Roberts’ long days and hectic travel schedule make it next to impossible, but bringing a dog into their lives once again is not ruled out in their future. In the meantime, they get their dog-lover fix when their children come to visit. Their daughters always bring along the grand-dogs so they can get their doggy snuggles in.

Roberts repeatedly said how thankful she is to the SPCA. She also profoundly feels that every dog has a role to play, and you have to be patient for the perfect dog to become available. Roberts waited numerous years to find that ideal family dog, and it paid off many times over the years because of Frosty’s sweet, gentle disposition. Little Frosty enriched the Roberts family life and eliminated Alyson’s fear of dogs.

Please be kind to animals.