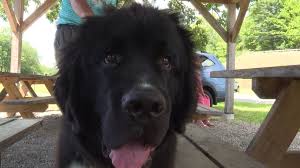 Elton is an 8-and-a-half-month-old Newfoundland pup weighing in at 100 pounds. He loves his daily trips to the water with mom and dad.

But what he does in the water is what makes him stand out.

Elton will be the fourth certified water rescue dog that the Holzhauers have had.

“It was our third Newf that we found had a love for the water, had that instinct and we just kind of fell into it. No pun intended,” Ralph said.

Elton started his training earlier than the rest– at 10 weeks old. Now, he’s getting ready for his first big test.

“He’s going to be 9 months old when he tries these things, which is very early for a Newfoundland,” said Anne Marie Holzhauer, Elton’s “mom.”

“If he didn’t like it, we wouldn’t be doing it,” Ralph said.

There are three different levels Elton can test at for water rescue training.

“Each gets progressively more difficult generally building on each of the lower preceding levels and difficulty,” Ralph said.

“What we are trying to do is get him to pass the first level and then attempt the second,” Anne Marie said.

Elton knows the signs of someone in distress. He follows the splashing of the waves and hears his cue “help me” or “save me.”

There are challenges when it comes to training.

Wednesday’s weather was windy and the waves were rolling in.

“For a young dog, a puppy, it’s going to be a challenge and confidence is certainly a big issue,” Ralph said.

The Holzhauers say they haven’t been called in for help in the past and likely wouldn’t because rescue dogs are not something commonly used in water rescue in this area. Elton’s abilities likely would be used personally for the family.

They say the biggest plus is the bond made between man and man’s best friend.

And that’s not all– this pup could soon be on the silver screen!

Wednesday, Jon Dorflinger, a filmmaker from Saratoga Springs, was in Westport to meet Elton, who is also an aspiring actor.

Elton is set to play his late older brother, Rowdy. Rowdy is famous in the community. He was a therapy dog, certified water rescue dog and worked every day in classrooms in the Elizabethtown Lewis Central School District.

Rowdy has many books written about him and now a movie or TV series is in the works.

“To hear other perspectives and other sides of it really kind of rounds out the experience and gives me, helps me get more immersed to that time and the real impact that Rowdy the dog had on the school and community at large,” Dorflinger said.

The filmmaker says they are still in the very beginning phases and working on a script.