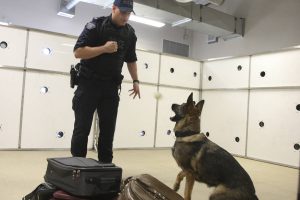 Alberta RCMP Police Dog Services (PDS) had an incredibly busy 2020. Although many Albertans spent a majority of their 2020 experiencing some stage of lockdown due to the COVID-19 pandemic there was no shortage of work for Alberta’s Police Dog Service teams.

In 2020 PDS responded to 2,800 calls for service and captured over 900 criminals. The PDS held a key role in rural property crime initiatives this year, and contribute this to part of the reason they were so busy.

PDS teams are used in a primary role in locating and apprehending rural property crime suspects.

The Alberta RCMP PDS is made up of 18 teams throughout the province. These teams are trained to track and search for suspects, missing persons, crime scene evidence, firearms, and controlled substances or explosives.

Approximately 650 involved firearms or other weapons;

450 calls were for missing people;

Over 950 calls were for property crime related offences;

And PDS were deployed in a tracking profile over 700 times, which resulted in 400 captures.

All Alberta RCMP Police Service Dogs are purebred German Shepherds. The RCMP has been breeding German Shepherds since 1999 and through this are able to provide enough puppies to satisfy the RCMP’s training needs and no dogs are purchased for training.

On average, one in three puppies will become an RCMP working dog or breeding female.

The RCMP says their dog teams will continue to respond to calls over the holidays and thanks their PDS teams for working tirelessly to keep Albertans safe in 2020.