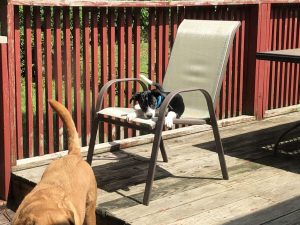 It’s May 25, 2019, and as a ripe 19-year-old I decided I wanted to adopt a dog to add a bit of extra love to my life. Enter Finlay: the 30-pound dachshund terrier mix that now serves as my best friend and emotional support animal.

I initially got Finlay to help support me through my struggles with mental health. I’ve had some adverse reactions to medication, and my doctor said getting a dog might be beneficial for me. Finlay has helped my mental health in so many ways and he never fails to bring a smile to my face.

That being said, he’s truly the definition of crazy, which has led me to equate raising him to playing a sport. I broke it down into subcategories for you to fully understand my life with my sweet pup.

Much like the grind of a student-athlete, there is a grind to raising a dog. I got Finlay when he was 11-weeks-old. I had to potty train him as well as teach him how to walk on a leash and every other puppy thing you can think of. I had to constantly tell him “No, you can’t get on the furniture” or to not bark at every male he sees — as many members of the Phoenix know for some reason Finlay is avidly against tall men. I truly don’t understand it.

One of the least glamorous moments I faced with Finlay was when I went on a weekend trip in November 2019. My amazing roommate — Editor-in-Chief Mary Chappell — volunteered to watch him for me and faced a puppy stomach flu. When I returned from the weekend, the sickness continued, earning me 3 a.m. potty breaks or having to clean dog puke off our rug. So, not fun.

Then there are the moments that make it so worth it, such as the greeting I get every single day I come back from class. My personal favorite is the way he snuggles up to me when he knows I’ve had a bad day. He’s such a good boy, despite the craziness.

While I’m not in the gym practicing sports every day, taking care of Finlay is truly an exercise in and of itself. I’m up by 7:30 a.m. every day. We go on two one-mile walk/runs a day. He’s a bit of an attention hog so he usually needs every ounce of my attention at all times.

I don’t get to go hang out with friends as often because I have Finlay back home to worry about. When he does tag along to my outings, a good chunk of my time is spent on short potty walks, eating up any moments with my friends.

But again, I honestly don’t even mind. He’s the best excuse for when I don’t want to do something. Just a quick, “Oh, well I have to get home to Finlay” is the best way to get away from someone.

I have never been a morning person. I probably never will be a morning person. But having a dog turns you into somewhat of a morning person. This is arguably my least favorite thing about having a dog. The amount of patience that goes into my 7:30 a.m. trips to take him to go potty is amazing. You never realize how tired you are more than when you’re standing outside waiting for a dog to pee and it’s less than 30 degrees outside.

Also, all the training takes so much patience. Finlay has a strict routine when he gets fed. Sit. Right paw. Left paw. Lay down. Wait. Go ahead. But someone had to teach him that, it wasn’t something he learned overnight.

He has quite the arsenal of tricks now, too. When someone is bouncing their knee, he will come and set his paw on their foot to alert them. His newest one: picking up markers. Not pens or pencils, only markers. My mom likes to obnoxiously throw Sharpies on the ground just so he’ll come pick them up and bring it back to her. He does expect treats for his performance.

So, I don’t know what it feels like to win an NCAA tournament or score the winning touchdown in a close game, but I imagine it’s the same feeling as the first time Finlay actually came to me upon hearing “Go to Mommy.” It was truly a euphoric experience.

I came home from getting dinner with Chappell once to find he got his head stuck in a Wheat Thins box. Upon us entering the room, he froze, seemingly trying to act invisible. It’s still one of the funniest moments of my life, honestly.

Having a dog in college is unbelievably hard, but Finlay has become such a pivotal part of my life. I am so glad I made the decision to adopt him.