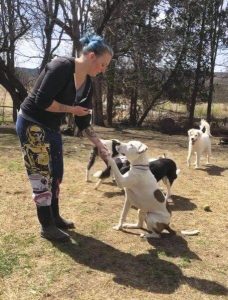 Thanks to the pandemic caused by the spread of COVID-19, Oneonta resident Sarah Cummings’ career has gone to the dogs. The 28-year-old launched the Underdog Enterprise, a dog-training and animal services business, earlier this year.

“We had this global pandemic and I’d been working in animal and dog rescue and the world of animals for 10 years,” she said. “Right when I got out of high school, I worked as a vet tech and at different veterinary hospitals since 2010. I was working for a clinic at the beginning of the year, but it was a small family practice and I was laid off. I was like, ‘OK, I’ve got to get creative now and figure out what I can do.’ I started doing online consults, because we were in lockdown at that point, so this started formally in March.”

Though many of her clients are canine, Cummings noted, her services are diverse and customer driven.

“I do local nail trims, and that’s been a pretty popular service,” she said. “I’ll do dogs and cats, but also exotic pets and anything like that, and I do dog training as well. I work with all animals, not just dogs, though that’s the primary (client) … and I have a formal certification through the Animal Behavior Institute.

“It’s a discussion of what do you need,” Cummings continued. “I primarily want to help animals, so I’ve done everything in one way or another. There’s an older lady I work with whose cat is in kidney failure, so I go and do fluids once a week for her; I have some day care clients that come here one or two times a week and drop their dogs off; I’ve cut nails on a lizard. It’s whatever people need or are looking for. I try to really work with what people need and what their schedules are. I’ve got seven dogs that live here permanently, a horse, rabbits and a snake, so it really is like a zoo and there’s no limit.”

“I get a lot of Oneonta people, but I also tend to get a lot of Cooperstown people,” she said. “There’s not a certain (client); it could be the little old lady with a cat or people who’ve gotten dogs during this pandemic because they’re home more so they have a new puppy and they want to set them up for success.

“And there’s a group on the Facebook page where we group (according to customers’ needs),” Cummings continued. “We’ll do puppy playdates or pack walks for dogs that are working on certain issues.”

“I want to be careful and respect people’s safety … so it really depends on what the client is comfortable with,” Cummings said. “For nail trims, I’ve been going to people’s houses and doing everything outside as I’m able and with a mask and that’s the most popular thing that I do. A lot of groomers were shut down, so it was a service a lot of people were into. It’s a lot less stress doing it in their own home than getting in the car and going to the vet and often the owner can help me hold (the animal) and they’re just more comfortable in their own environment, so it’s worked out really well.”

As the Underdog Enterprise establishes itself, Cummings said, she plans to expand services.

“Our house is at (1460 state Highway, Oneonta) and it’s an old farmhouse,” she said, “so I’m hoping to convert one of the smaller outbuildings into a kennel and do boarding and daycare and stuff like that. And I’m hoping to have a little dog cabin kind of thing, so we’re doing the renovations on that now.

“My focus right now (is on) doing this full time and doing the kennel renovations so we actually have an area on site dedicated specifically to this,” Cummings continued. “And there’s a brand-new dog park opening in Milford, so I’m hoping to work closely with them and do classes and work with children and (teach) dog park etiquette.”

For more information or to book an appointment any day of the week, find “The Underdog Enterprise” on Facebook.