Pups Are Training And Graduating 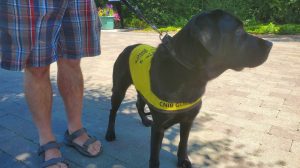 Four soon-to-be Seeing Eye dogs are ready to move on to the next phase of their training after spending almost a year in Saskatchewan.

Indy, Percy, Wallace and Lulu are four black lab puppies who have spent the last 11 months doing the basic Seeing Eye dog training with the Canadian Institute for the Blind (CNIB).

The four pups arrived in Saskatchewan in August 2019. Indy and Percy have now graduated and are moving to Carleton Place, ON, to begin the next phase of formal training. Wallace and Lulu will move in the fall.

Kerry Macdonald volunteered to raise Indy and has been with him for the last year.

“Stay. Keeping off the couch – all the things they want us to teach – always a challenge,” said Macdonald. “But the great thing about it was a sense of accomplishment every time you got to a new stage – they suddenly start doing what they’re supposed to be doing – you’re like, ‘yes! Let’s go!’”

“They’re still puppies,” said puppy raising supervisor Kezia Gray. “We just really want the volunteers to lay a foundation. At the end of it, we just want a happy, fairly well behaved, puppy and that’s what we’ve got

Guide dogs allow for blind or partially sighted people to have independence they would not otherwise have.

“Being able to get up and go out of your home independently and not rely on someone to guide you or to rely on your white cane,” said Christall Beaudry, Executive Director for CNIB Saskatchewan. “But to have this companion with you that you trust and will take you around – it’s a huge support.”

Beaudry says raising the dogs in Saskatchewan better equips them for the harsh Canadian climate. CNIB is also hoping to get more puppies in the fall.

“We started our program only two years ago,” said Beaudry. “We’ve slowly been expanding and we’re looking forward to expanding in our province.”

Gray says only about 50 per cent of the guide dogs around the world who enter the next phase of training become full Seeing Eye dogs. Others become service dogs elsewhere. However, dogs who have training through CNIB see a 65 per cent graduation rate.

Macdonald is sad to have his time with Indy end, but knows he is off to help someone who is in need.

CNIB is looking for volunteers to raise puppies as they continue to expand their guide dog program. They say raising a guide dog is more intensive than raising a normal pet and the time needed to invest into the dog is more demanding.