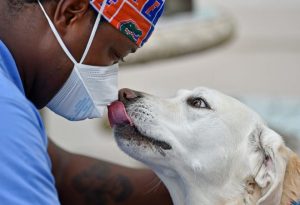 It was six months ago when Florida’s first COVID-19 patient was admitted to Doctors Hospital of Sarasota.

Janell Albers, a nurse at the hospital’s intensive care unit, had just returned to work from maternity leave.

“For me, it was a whole new meaning of scary because you have the unknown, and then I have a baby at home, and I also have a toddler,” she said.

Now, as the number of COVID-19 cases across the state begin to slow down, so have virus-related hospitalizations at Doctors Hospital. A unit that once occupied four halls on the fifth floor of the hospital now only takes up less than one.

“We’re kind of getting used to it,” said ICU nurse Whitney Olund. “(Coronavirus) is kind of like an everyday thing, like any other thing that we deal with.”

On Tuesday, Albers and Olund were among other health care workers at the hospital who got some much-needed “puppy therapy” from six of Southeastern Guide Dogs’ “ambassador dogs.”

The Palmetto-based nonprofit breeds, raises and trains Labrador retrievers for those with visual impairments or PTSD.

Cathy Mithaug, who has volunteered with the organization for eight years, said the dogs needed the affection just as much as the health care workers did. The ambassador dogs typically make visits to hospitals and nursing homes – places that have limited visitations in recent months to help mitigate the spread of COVID-19. “Just feeling the dog is very calming for a lot of people,” Mithaug said.

Bob Meade, CEO of Doctors Hospital, serves as vice chairman on the board of directors for Southeastern Guide Dogs. He said hospital staff have taken extra care to check in and show appreciation for employees, and he was “thrilled” with how Tuesday’s event came together.

“Today has already had an enormous impact,” he said. “I’ve talked to people I’ve passed in the hallway that have already been out here, and they just absolutely loved it. It’s a highlight of their day – probably their week or month.” Meade added that while the state’s coronavirus cases are encouraging, he is still concerned about the potential for another spike in the fall, as cold and flu season returns and students head back to school. He stressed the importance of wearing face masks and following other CDC guidelines regarding personal hygiene.

“It’s hard working in the hospital all day – especially people in the COVID unit – and then you go out into the community, and you see people that don’t really take it seriously,” he said. “If you’ve ever seen anyone on a ventilator, you’d take it seriously.”

Respiratory therapist JoAnn Inners was among those tasked with caring for the hospital’s first coronavirus patient. “We’ve learned a lot about how to take care of these patients over the last six months,” she said.

As soon as Inners gets home from work, she throws her scrubs in the washing machine and heads to the shower. What was already a habit for her has only “ramped up” since the coronavirus outbreak began.

Added Allison Mills, another respiratory therapist: “Nobody comes near me when I get home at all.”

But the shared sense of purpose and appreciation make the pressures of the job worth it, said respiratory therapist Stephanie Johns.

“I think things like this are amazing,” she said. “They have done a lot of things for us, like lunches and snacks throughout the day, just to keep everybody upbeat and motivated.”’

Mills added that the appreciation doesn’t end when she walks through the hospital doors at the end of her shift, either.

People out in public “notice that you’re in health care, and you get a lot of thank you’s and a lot of appreciation,” she said. “And that helps. That really does help.”