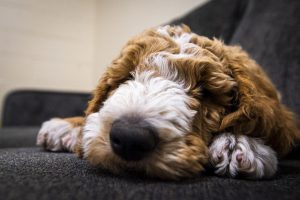 Perry, a counselor and forensic interviewer at the Nampa Family Justice Center, said one of the side effects of the condition is the possibility of sudden death.

Paisley, now 13 years old and a certified therapy dog, had been helping Perry for several years during her interviews with children who were suspected of being abused.

“I can’t be bringing him to work and have the chance that he die while I’m in an interview with a child,” said Perry, who also is a licensed clinical social worker. “And so I decided to retire him.”

Perry said she saw the impact Paisley had on children, even if they weren’t petting or touching him. It was just a comfort for them to know Paisley was there.

This caused Perry to consider training another dog to work with her at the Family Justice Center, which is located at 1305 Third St. S. in Nampa and serves victims of domestic violence, child abuse, sexual violence, elder abuse, stalking and sex trafficking.

And in February, her new partner — a golden retriever-poodle mix, or goldendoodle, puppy — was born. The puppy, now 10 weeks old and named Rucker, came home with Perry in early April. He was donated by Maggie’s Dynamic Doodles, a Nampa-based breeder, to serve as a comfort dog for children, as well as adult victims, at the Family Justice Center.

In 2015, Perry started incorporating Paisley into her counseling sessions and forensic interviews, which are focused on gathering information in a non-suggestive or non-leading manner from a child who is suspected of being abused. The pair had just become a certified therapy dog team through the Alliance of Therapy Dogs a year prior.

Most children like the idea of having the dog in the room for the duration of the interview, Perry said. But surprisingly, they don’t always interact with the animal right off the bat; sometimes it takes a bit of time for them to engage with the dog.

During breaks in interviews at the Family Justice Center, when Perry would step out to talk to the observing investigators, she’d let Paisley stay in the room with the child if they wanted. While on break, this is when the child often would look to Paisley for comfort, hugging or petting the dog. “That was really when I could see them on the video cameras like lean over and hug the dog or talk to the dog,” Perry said. “I’m a stranger that they have never met before, and then I’m sitting in there asking them details about abuse that has happened to them. It can be embarrassing and hard to talk about. … So, the dog adds a layer of comfort.”

Jeannie Strohmeyer, the program manager at the center, said while giving tours of the facility, one of her favorite stories to tell involves Perry and Paisley.

“Jenny (Perry) was interviewing a child, and the child wasn’t wanting to disclose or talk about anything; they just felt really uncomfortable and shy,” Strohmeyer said. “And then while Jenny was on break, the child who was still in the room with Paisley began to tell the dog their story.”

Perry said that isn’t the norm for most interviews, but it’s a perfect example of the real impact dogs can have in these types of situations. This also is why she knew it was so important to train another comfort dog to help victims.

“It was a bummer for me to have to retire Paisley. He is just calm and easygoing, and I can totally trust him with anybody,” Perry said. “If it wasn’t for his heart stuff, he’d still be here and doing things.”

Initially, Perry said she and her husband were talking about buying another dog to train, but before they could do that, Rucker came into the picture.

Perry said Maggie’s Dynamic Doodles had donated a goldendoodle puppy to the Family Justice Center’s annual fundraising gala in 2019 and 2020. At this year’s event, the puppy was auctioned off to a family and brought in $2,400.

Perry said she and her husband watched the dog for a few days before the gala and saw just how sweet the breed could be, as well as its potential for being a comfort dog.

After talking with a Family Justice Center employee, the owners of Maggie’s Dynamic Doodles decided to donate another puppy to work specifically within the nonprofit, Perry said. Rucker had been selected for his temperament, calm demeanor and desire to engage with people.

“I never thought we’d have a dog donated to the Family Justice Center to be used for this. I think in my head it was always, ‘Oh, it’ll be my husband and I buying another dog,’” Perry said. “It is so encouraging to see how much people value this, and that Maggie’s Doodles were willing to give a donation like this. It’s just incredibly generous.”

Before Rucker is able to work with any clients, the pair must become a certified therapy dog team, Perry said. He’ll continue to visit the Family Justice Center a few days a week to get acclimated and familiar with the staff.

Once Rucker is certified — which will most likely occur once he is a year old — he’ll continue to be in forensic interviews with Perry, but also can assist any of the Family Justice Center’s partner agencies, such as law enforcement, victim advocates and Child Protective Services. Although he’ll be trained as a therapy dog, Rucker will be considered a comfort dog while at the Family Justice Center, Perry said. This is because the Alliance of Therapy Dogs, the certifying agency, doesn’t allow a person to have their personal dog acting as a therapy dog in their workplace since Rucker lives with Perry and her family — just like Paisley, who also is certified, but was considered a comfort animal before his retirement. Perry said Rucker will be utilized in a more widespread manner than Paisley, working with victims of all ages and learning additional tricks. This could include bringing a person a box of tissues or laying his head on their lap.