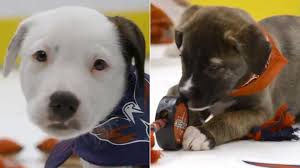 Good news for fans of hockey dogs in general and the Washington Capitals in particular – the Caps Canines 2020 Puppy Playoffs are a thing again this season, and they’re happening soon.

In fact, the big game is scheduled to air on the team’s Facebook page this Friday, June 26.

Essentially a hockey version of Animal Planet’s Puppy Bowl, it started last year and promises to be an even better event this year, with special guests watching from their homes including Caps superfan Ovie the Bulldog.

Players will be named after various Capitals skaters and goalies, and they will all come from a shelter nearby.

Filmed at the Olde Town Pet Resort in northern Virginia, another special guest fan will be Captain the Caps Pup, the team service dog who is due to graduate to Puppy College soon.

Captain recently won the Best Team Dog Award in the 2020 NHL Fan Choice Awards, beating out a ton of other great competitors to take the coveted honor.

“Need a rule check,” Ovie commented while sharing the announcement about the upcoming game, “Is it considered offside if I just nap inside the [face-off] circle and never leave the [offensive] zone?”

The actual human Washington Capitals finished the abbreviated-yet-extended 2019-20 NHL season with 90 points and a record of 41 wins, 20 losses and eight overtime losses through 69 games, for a winning percentage of .652, good enough for third overall in the Eastern Conference and first in the Metro Division.

If the playoffs are able to go on as scheduled due to COVID-19, Washington will play the Boston Bruins, Holland the Pup’s Tampa Bay Lightning and the Philadelphia Flyers during the play-in round for seeding purposes during the first round.

The site of those games is still being determined, though the initial field of a dozen host cities has been trimmed in half.

For more news, analysis and opinions on Capitals hockey, be sure to check out our FanSided Network sister sites Puck Prose and Stars and Sticks.

We’d love for you to join our team here at Dog O’Day as we cover the worlds of canine sports, entertainment and lifestyle; just apply here. Contributors are currently a volunteer position, though we hope to grow enough soon to make it a paid opportunity.