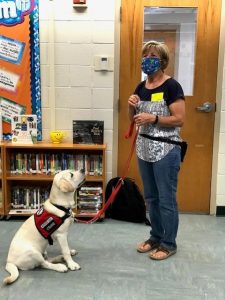 Students in teacher Michelle Bettler’s fifth-grade class at PVPV Rawlings Elementary School were in for a treat last week as Marie Massie from K9s For Warriors brought in one of her service dogs to meet the children.

Massie has raised many dogs for the K9s For Warriors, and this is not the first time she made an appearance at PVPV Rawlings to teach the children about the important work she does.

The puppies Massie raises stay with her until they are old enough to go to the kennels, where they will then receive the proper training to certify them as service dogs.

Moondog, the puppy Massie brought to visit Bettler’s class this year, is a 6-month-old English lab preparing to receive official training. The puppy got its name after Massie’s friend Bill “Moon” Mullins, a retired veteran and cancer survivor.

“It is a good experience for [the students] to learn about veterans and about PTSD,” said Bettler. “They are in fifth grade so they process it really well, and they understand now that if they see dogs with vests on what that means.”

Bettler and PVPV Rawlings Elementary have been exposing their students to the importance of K9s For Warriors for years now.

Two years ago, they hosted an event named “Ten Small Steps of Kindness, One Giant Leap for K9s,” where students completed acts of kindness in exchange for donations. All donations went toward sponsoring a puppy at K9s For Warriors, whom the class nicknamed Rawly. Rawly is predicted to graduate within the next year on behalf of the students and faculty at PVPV Rawlings Elementary.

Leading up to Veteran’s Day on Nov. 11, Bettler’s class learned about the importance of service animals and the significance of the K9s For Warriors organization.

“The culminating experience of everything is having the dog come to class,” Bettler said. “It is important for [the students] to get a better appreciation for the sacrifice that veterans made while serving the country.”

Each year the students write letters to veterans and to the K9s For Warriors project after the puppy makes its visit. The letters are a perfect example of just how much students retain from the experience.

“We made it our mission to support this particular organization,” Bettler said. “The kids absolutely love it.”