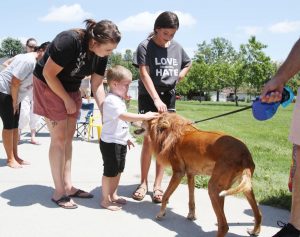 Ben Alloway was thrilled to have so many furry visitors at his fourth birthday party on Saturday afternoon.

Ben’s parents, Kyle and Makayla, arranged to have a surprise “puppy parade” with visitors walking dogs by the Alloways’ Juniata home during the party.

Due to concerns about the novel coronavirus disease, COVID-19, the party itself was limited only to family.

Kyle and Makayla used Facebook to invite the public to bring their dogs and walk by the Alloway house, however.

“He thought it was great,” Kyle Alloway said. “He was just having a good time anyway because his family was here. He loved the animals. He was handing out treats, and he was petting them. Some of them had gifts for him, including a service animal that had a present for him in her backpack.”

“This year we asked him what he wanted for his birthday and his wish was to have a ‘wolf petting zoo,’ ” Kyle said. “He’s really taken an interest in wolves.”

The effort started with Kyle and Makayla asking friends they knew who had huskies to bring their dogs by, which turned into any dog welcome.

Still, Kyle estimated there were 10 huskies in the parade.

“We had a really good turnout,” he said.

Michelle Jones, whom the Alloways hadn’t met prior to Saturday, organized parade participants from a church parking lot, about a block away. She brought a card for everyone to sign.

The Alloways had a water bowl and goodie bags available for the dogs.

Kyle was encouraged by the public participation at his son’s birthday party.

“Honestly, I think people need something good right now where it’s kind of a rough time,” he said. “People have been home. People can’t get out. This was a positive experience for everybody. It just shows our community is close, comes together.”