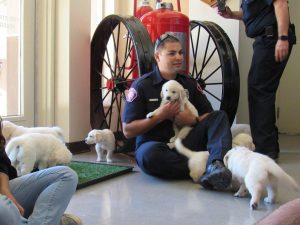 Hanford Fire Department will have some furry new recruits soon.

The department is partnering with the California Service Dog Academy in Visalia to train two new puppies to help firefighters with stress.

Firefighters Connor Kurtz and Matt Martinez are heading the program and will be the two primary handlers for the puppies that are chosen for the department.

Kurtz said there are several services already available for firefighters coming back from particularly bad or difficult calls, like counselors, therapy sessions or talking to a chaplain, but he thought having a dog around would be a beneficial outlet as well.

He said being able to hang out with a dog can relieve stress and anxiety, as well as raise morale in the fire house.

Martinez then reached out to California Service Dog Academy, which trains dogs to help veterans with their mental health.

“It seemed like kind of a natural extension to help out local first responders as well in the same exact way,” Rebecca Corso, head trainer at California Service Dog Academy, said.

The academy decided to donate two puppies to the department as a way to not only alleviate the mental stress of the firefighters, but also to bring joy to the community.

This will be the first of the academy’s programs aimed at first responders.

A litter of 10 golden retriever puppies explored HFD Fire Station 1 Tuesday morning and visited with some of the firefighters.

Corso said she wants the 8-week-old puppies to become acclimated to the sights and sounds of a fire station, so as part of their training the puppies listen to recorded sounds from the fire house every time they eat so it becomes a positive experience for them.

The department will know which two puppies it’ll be getting on Saturday and the puppies will be delivered a week after that.

For the next year or two, the academy will support HFD with all the training needs for Kurtz and Martinez on a regular basis. Martinez thanked the California Service Dog Academy for not only donating the dogs but for putting the time and effort into training them and working with the department.

Kurtz said he hopes other local agencies see what the department is doing and in turn start their own programs. Corso said the academy has already received interest in the program, which they hope to expand in the future.

Kurtz said he’s grateful for the opportunity and is excited to see the outcome of the program and how it helps the firefighters in the long run.

“There’s a lot of support behind it from the department and the community and we’re just looking forward to it,” he said.

Name suggestions for the puppies are being taken on the Hanford Fire Department Facebook page.