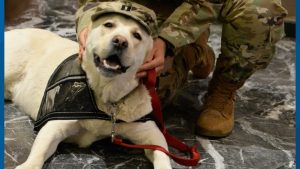 The troops are returning the favor with belly rubs.

The dogs are courtesy of Puppies Behind Bars, a New York City nonprofit organization that pairs inmates in regional prisons with puppies to be trained to become service dogs.

The group brought the dogs to hotels where guardsmen and medical providers were staying, as well as the alternate care facility at the Jacob Javits Convention Center in Manhattan, to give those responding to COVID-19 a stress break, according to Gloria Gilbert Stoga, the program coordinator.

“The National Guard was asked by Sergeant Masci in Kingston if they needed anything, and their answer was, ‘Service dogs?’ half in jest,” Stoga said.

“There’s something about a dog that people love and they gravitate to and let their guard down,” Masci said.

The idea was raised up to the governor’s office, Stoga said, “and they recommended Puppies, so here we are.”

“As soon as we were asked, I said that of course we would help, and one week later [Friday, April 17], we started,” Stoga continued.

Puppies Behind Bars began in 1997 and has almost two dozen years of breeding and training experience to prepare dogs for service or therapy duties.

It was a perfect fit for the current military missions in New York, Stoga said.

“The amount of stress that the military and medical personnel serving in New York City are going through is extraordinary,” Stoga said. “The fact that our dogs can provide some comfort makes me prouder than I think I have ever been of them.”

The dogs are raised and trained in seven different correctional facilities in upstate New York. About 140 prison inmates raise the service dogs and with support of the Puppies Behind Bars staff, train them for wounded veterans and first responders.

To prepare them for the work, the dogs receive some 100,000 hours of socialization during their two years of training.

“We’re set to do eight shifts a week, two hours each, and the idea is that this is a way for the young soldiers of the Guard to decompress, to just pet a dog and have a dog lick them and kiss them.”

The dogs live in prison with “puppy raisers,” inmates who are matched with them for the mutual benefit and bonding the training brings.

“Our dogs learn, instinctively, to help people who need them,” Stoga said.

Stoga discovered that the efforts have reached further than the uniformed responders in New York.

“The Guard is also taking the dogs to meet with the nurses when they come back from the hospitals around the city, and what I’ve found out that I didn’t know is that the nurses are literally coming from around the country,” Stoga said.

“They don’t know anybody, they’re working 12 or 20 hour shifts and they’re coming back [to their hotels] and the National Guard is there with service dogs, and the nurses get to pet them and love them.”

The dogs are doing amazing work out in the world and at this particular moment in time, are bringing a tiny bit of joy and normalcy to people for whom joy and normalcy seem almost impossible to remember.”

The ability to hug and pet a dog during a time of social distancing is what makes the difference, said Army Capt. Yvette Valle, the headquarters detachment commander for the 104th Military Police Battalion.

“The experience here is quite surreal and unlike anything I’ve experienced in the military,” she said.

With the long hours and the stress of the unknown, the missions for soldiers during the pandemic has been unlike any other disaster response effort, Valle said.

“The biggest thing I promote within my company is a positive mental attitude during this crisis, and their attitude has been more than I expected with everyone willing to do whatever is needed,” Valle said.

Bringing in the dogs has certainly made a difference.

“Coordinating the dogs has definitely boosted morale with the soldiers and with the nurses,” Valle said.

“It gives them a piece of family, a closeness that we can’t experience due to social distancing,” Valle added. “They can get that through the dogs. It gives them love and warmth that they are sacrificing being here for this cause.”

“The dogs are doing amazing work out in the world and at this particular moment in time, are bringing a tiny bit of joy and normalcy to people for whom joy and normalcy seem almost impossible to remember,” Stoga said.

The dogs, trained to work with veterans, wounded warriors and first responders, are a natural fit for supporting the National Guard response effort and can make a real difference for soldiers, said Army Maj. Gen. Ray Shields, the Adjutant General of New York’s military forces.

“I am sure this means the world to all those who get to spend time with the puppies,” Shields continued.

“I went twice last week with two dogs,” Stoga said. “One was raised in Fishkill and one in Bedford Hills.”

Serving as a stress relief, the visits are now a regular part of the working shifts for military and medical responders at the Javits Medical Station and hotels in Manhattan.

Stoga spoke with one off-duty soldier during a visit on April 18, and asked where he was from.

“A small town in Dutchess County,” he replied, “Fishkill.”

Pointing to one of the dogs, Stoga said, “This dog was raised in the Fishkill Correctional Facility!”

The soldier couldn’t believe it, he got down on his knees to meet a new hometown friend, she added.

“It’s been a great success,” Masci said. “Everybody is thrilled to see them.”

“For Puppies Behind Bars, all of our service dogs go to wounded war vets or first responders,” Stoga said, “So these dogs being able to help in this way before they are placed is just phenomenal. We’re just thrilled to be able to work with the National Guard like this.”