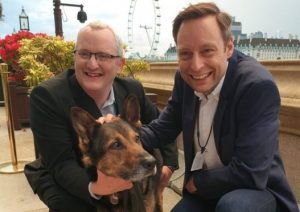 Regional Conservative MSP Liam Kerr began campaigning for Finn’s Law in 2018, and a petition to implement it was signed by almost 57,000 people.

The bill has now passed the final hurdle in the Scottish Parliament and it will now become enshrined as part of the Animals and Wildlife (Penalties, Protections and Powers)(Scotland) Act.

Prior to the new law, criminals who harmed service animals such as police dogs or horses could only be charged with property damage. Now they could receive a jail sentence of up to five years.

It follows a campaign by police officer Dave Wardell, whose German Shepherd Finn was stabbed while chasing a suspect in 2016.

The pair went on to feature on the TV show Britain’s Got Talent.

Mr Kerr said: “This is a great day for Dave Wardell and his team, for Finn and for all the members of the public who supported our campaign to protect police animals.

“The Scottish Conservatives brought the Finn’s Law campaign to Scotland because the law needed to be updated and we wanted to give brave service animals the legal protection they deserved.

“Thanks to Dave and Finn’s tireless campaigning, along with so many other dedicated campaigners, this will now be a reality, and Scotland will now catch up to England and Wales in this important area.

“It is a massive relief to get this legislation through.

“From now on service animals will have better protection under Scottish law and criminals who harm them will be given serious punishments, fitting the harm they have caused.”