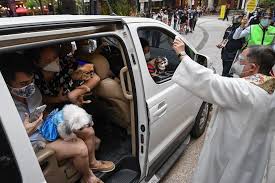 Covid-19 lockdowns have brought with them a worldwide upsurge in pet adoptions as people finally found time to care for a furry family member – and enjoy the stress-relieving benefits animals can bring.

This has been a global phenomenon: in New York, demand for dogs was “totally unprecedented”, according to non-profit Foster Dogs. In Australia, the RSPCA’s phones have been “running off the hook”. And in the United Kingdom, according to one survey, nearly half of all Britons who already own a pet went and got at least one more.

However, as devoted pet parents faced the prospect of returning to the office and their normal social lives outside the home, it prompted the question: who would take care of a pet newly accustomed to so much attention?

Given that pet ownership was on the rise well before the pandemic and flat living has become the norm in cities everywhere, a number of developers have already taken animal welfare into account.

For example, Waterline Square, a two-hectare, three-building residential development designed by Rafael Viñoly Architects, Richard Meier & Partners Architects and KPF on Manhattan’s Upper West Side, provides equally for pets and human residents. The Waterline Club – an extraordinary indoor amenity space designed by the renowned Rockwell Group – is home to an indoor playroom where dogs can socialise, a dog washing station and a dog training studio. At the centre of the development, a park provides outdoor space for canines to run around.

Winter can get chilly in New York City. To save frosty paws, 555TEN, Extell Development’s luxury rental by Hudson Yards, has an outdoor dog run on the 12th floor that is both covered and heated. The property’s management has also teamed with partner company Throw Me a Bone to offer in-house dog walking and feeding services, including people who will spend time with pups when residents are away.

Deborah DeMaria, sales director at Quay Tower, a luxury condominium located at Pier 6 in Brooklyn Bridge Park, says that for many people, a pet can be viewed as “their child or their sibling or their best friend”.

“Pets are an important part of the family so it makes sense that their daily needs factor into the home-buying equation,” she said.

Quay Tower is surrounded by 32 hectares of green space. To avoid muddy paws messing up the floor after an outdoor romp, many of the expansive residences feature a mud room.

A rare amenity in New York, each mud room is accessed via a second entrance to the home, and is equipped with a sink and washing machine. For an extra thorough scrub, the building also offers a pet washing station. Nearby, there are more perks, like the Pier 6 Dog Run and Wag Club, a doggy day care and grooming centre.

Featuring architecture by FXCollaborative, interiors by Deborah Berke Partners and stunning water panoramas, the building’s amenities include extensive outdoor space designed by Future Green Studio. Messinger chose to reserve a portion of a separate 2,350 sq ft terrace for a dog run, ensuring that residents have a space similar to a backyard to exercise and entertain their canine companions – without having to leave the building. For those who would rather take their dogs out, the building is located across the street from the forthcoming 20,000 sq ft Elizabeth H. Berger Plaza park and is close to Battery Park and the Hudson River waterfront.

If you don’t have time to walk Fido yourself, a luxury pet concierge at 30 Park Place Four Seasons Private Residences can do the leg work for you. In addition to GPS-tracked walks with daily updates and plenty of pictures, services provided by Poochi’s professionally trained and certified staff include feeding, washing, playtime and vet care, with overnight boarding also available when owners are away.

Continuing this trend in Florida, a dedicated pet concierge and on-call veterinary surgeon will also be available to cater to pets’ every need at the new Four Seasons Private Residences Fort Lauderdale, the first five-star development coming to Broward County.

Still in the US, New Jersey developer KRE Group has partnered with in-home pet service provider Bark Buildings to create a new pet concierge and canine club amenity programme across its portfolio of Jersey City rental buildings. The KRE in JC Canine Club is free to residents and consists of monthly events such as themed play dates and dog-friendly photo shoots, welcoming new residents with gifts including dog toys and treats.

Signing up for the programme will also give residents access to on-site and on-demand pet care services for an additional fee, such as daily walks, play dates, in-home sitting, obedience training and cat visits. The KRE in JC Canine Club is now open at Journal Squared, 485 Marin, Grove Point, 18 Park and 225 Grand.

Over in the UK, 80 Holland Park, the first fully serviced residential development in London’s W11 postcode, has a back gate which opens directly onto the 21.8-hectare Holland Park – perfect for dog owners and walkers. In addition to a mud room for residents’ wet coats and muddy boots, there’s also a dedicated dog room complete with a purpose-designed and installed dog shower and drying facility.

The prime London boutique development comprises 24 carefully crafted homes, including lateral penthouses and duplex town houses, each one unique but all finished with the consideration and quality for which Christian Candy’s CPC Group is renowned.

Mayfair Park Residences by Clivedale in London also offers dog walking and pet care facilities. Over and beyond the 24-hour concierge and security, valet parking and chauffeur services, one call is all it takes to organise some pet pampering.

Singaporean developer GuocoLand has also picked up on this trend. “In Singapore, more people are owning pets today. We’ve noticed this trend at our completed developments such as Leedon Residence and Goodwood Residence, too,” said Dora Chng, general manager (residential) at GuocoLand.

“As such, we decided to dedicate an area at Martin Modern [due for completion in 2021] where our residents’ pets can move freely without being kept on a leash.

Keeping in line with the botanical garden concept of Martin Modern, we applied the creative use of landscaping to keep the pets within the area instead of using conventional fencing barriers.”

At Martin Modern, a two-tower development located in Singapore’s prime District 9, 80 per cent of the land area will be developed into a unique botanical garden and native flora arboretum with various concepts – such as a party lawn, a forest trail, rain gardens and even a maze.

Chng said there will also be a pet corner at the group’s upcoming development, Midtown Modern, which is targeted to be launched for sale next year.