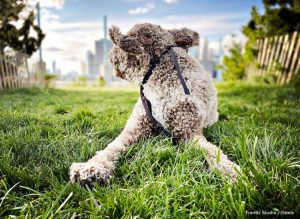 I’m here at Beagle Island Park nearly every day, in hopes of seeing my dog—well, I guess, technically, he isn’t my dog anymore. Actually, he was never really my dog; we simply walked as a pack of two when we both hit rough patches in our lives. I’d wake up under a smoke shop’s eaves to his soft snoring in my face. He had the same color eyes as my pops; Pop always said he’d come back as a dog, so I figured, why not? Weirder things have happened.

I park my cart just outside the chain-link fence and sit beneath a densely branched fig tree. I just watch and listen. Those of us who live in the margins of society are basically invisible, so people never worry about what they do or say in front of us. The only time I was ever seen was when Pops was with me—and the watchers were always under the age of six.

Blades of grass glistening with dew leave little droplets of moisture on the noses of curious Terriers and a yellow Lab. The Germans—Shepherd, Rottweiler and Boxer—scent the parameters of the park, drawing clear territorial boundaries while their humans sip steaming cups of coffee.

This is a strange place, one where cars and canines are markers of status. The men pull up in either sleek, elongated SUVs or high-performance, testosterone-fueled sports cars. The women wear gaudy, blinged-out sun visors and love to boast about their canines’ impressive lineages.

I’d heard one woman, Ms. Worry Wart, tell another woman that she was able to trace her Pug’s ancestors back to the infamous Pug of Empress Josephine, who’d supposedly bitten Napoleon on their wedding night. Ms. Worry Wart always dressed her pug according to the seasons. In cooler weather, the dog came with a raincoat and galoshes; in the warmer months, Ms. Worry Wart followed her dog around the park with an umbrella, a small battery-operated fan and a water bottle!

I look over at the area I’d nicknamed “the Red-Light District” to see who Mel, an AKC-registered Great Pyrenees, is romancing these days. Two rows of trees had been planted so close together that their branches formed an archway. Anyone over five feet tall (i.e., most adults) have to duck to keep from getting slapped in the face by them. This area had been the site of more than a few trysts that resulted in litters of mixed-breed puppies or a hush-hush abortion before the upcoming photo shoot for Boise’s Bowwow Calendar.

This occurs despite the city-wide ban on intact dogs visiting the park. However, the ban ceased to exist when a pack of show-dog owners sued the city for discrimination and won their suit. Now, the city urges guardians to use “common sense.” They posted a disclaimer on the entrance gate that says the city will not be financially liable if “unwanted pregnancies” occur. Cracks me up every time.

Mel is notorious for his baritone bark and lightning-fast movements. His owners, Mama-Sees-No-Poop, and her husband, Dogs’ll-Be-Dogs-Dude, are not park favorites. When Mel assumed the inchworm-scrunch position, Mama-Sees-No-Poop usually began digging in her bag for something—anything that would keep her from seeing the giant tootsie rolls snaking out of her dog’s massive ass. Then Mel, feeling a little lighter, would gleefully kick up chunks of mud and grass with his hind legs while locking in on some poor little bitch who was just there to chase a few balls.

Today, it’s Jinxy, an agile Australian Shepherd who is not a fan of Mel’s rape-and-flee maneuver. When Mel mounts the Aussie, her hackles come up and she bares her teeth. We all hear the menacing snarls. Jinxy’s owner yells for Mel’s owners to restrain him—that’s when Dogs’ll-Be-Dogs-Dude shouts that the dogs are just playing; then, like the town crier, he tells everyone that Mel’s premium sperm fetches a pretty penny and Jinxy should be so lucky! He brags that Mel is an AKC Grand Champion. Apparently, he’s been a BOS, BOB and now finally a BIS. He had scored five points in his Division 9 last spring.

I don’t know what any of that means, but I also don’t care to know—and I suspect no else does either.

It doesn’t look like I’m going to see Pops today. I tug on the cart’s handle and it won’t budge. The left front wheel had been swallowed by a patch of mud. As I kneel down to dig it out, I hear that familiar bark. I turn around and there he is.

It hadn’t been that long since I’d seen him, but he already seemed different; a little more food and a little less exercise looks pretty good on him. Pops had always been an adventurous sort, never wanting to stay in one place for too long, but apparently, he no longer has those itchy feet. He’d collected more stories in his few years than most people do in a lifetime. He was enthusiastically greeted by the locals as if he was a celebrity. I had to laugh. People only see what they want to see.

I wondered if Pops remembered when we’d last communed together.

Officer Engel gently kicked my foot with his boot—unlike most of the other police officers, who kicked me like I was a piece of garbage with a contagion they didn’t want to catch. I hadn’t opened an eye until I’d heard Pop’s growling.

I wiped the crust from the corners of my eyes and sat up.

“It’s cold out here. There’s a church two blocks up. I asked them to keep a plate warm for you. If you head up there now, you’ll make it before they close.”

“That’s another thing I need to talk to you about. You know our county passed a breed-specific legislation ordinance that bans the owning of Pit Bulls.”

I countered, “Officer Engel, you might want to get your eyes checked. Pops here is a Labradoodle. Smell his feet—they smell just like corn chips, which is how I know he’s a Labradoodle.”

“Besides, no one owns Pops here. He’s his own man.”

Officer Engel then reached into his front pocket and pulled out something that looked like beef jerky and fed it to Pops. “I’m sorry about this, Jesús, I really am, but they’re going to be cracking down hard. And street dogs will be the first ones to get picked up.”

“Then what’re ya gonna do—go house-to-house like some kind of gestapo?”

“I suspect not, but what I do know is that Animal Control will be patrolling these parts by week’s end. I can drop Pops off at the shelter for you. Give him a chance.”

“The chance of slim or none? No thanks!”

“Then find him a home—a real home.”

And I actually did. I knew exactly who needed Pops. There used to be a couple—Mr. Bitrot and Ms. Kind Eyes; he was in tech and dressed like his mother still laid out his clothes for him, she was a lawyer for PETA. They had a dog, Homer, who looked like Pop’s twin. They lived in the neighborhood and often walked to the park with Homer during weekday lunch breaks and weekend mornings. Now, it was only Ms. Kind Eyes. Apparently, Mr. Bitrot moved across the country for a new job, took the dog but left her. Ms. Kind Eyes, clearly broken-hearted, still came to the dog park.

I followed Ms. Kind Eyes home that day—but not in a creepy way. I tied Pop’s rope collar to her front door knob. I rang her bell and then hid behind her duplex’s overgrown oleander bush. (I’d left my cart at the park and just hoped it’d still be there when I got back.)

When she opened the door, she startled. I wondered if, for a split second, she thought her dog and beau were back. She then untied him and read the note I had tucked under his collar: You’re better off without him. I will never leave you. If anyone asks, I’m a Labradoodle. And an emotional support dog. I could see she was moved by my gesture. She invited Pops into her house, and that was that.

Now, I watch them walk into the dog park. Pops looks over at me and wags his tail but doesn’t try to come toward me. I understand. He has a new home and a new partner.

I look at the angle of the sun in the sky. If I leave now, I can probably make it in time for lunch at the church.