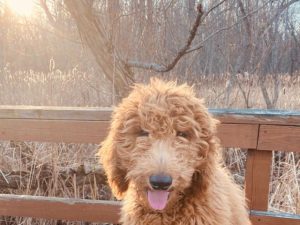 During these stressful times, a local police department is making changes.

The North Tonawanda Police Department is expanding and reaching out to the community like never before.

Their newest and most popular officer… has four legs.

Police dogs come in all breeds, shapes and sizes.

Some K9’s are tasked with finding drugs, others find people… and then there’s Remy.

Remy is a 4-month-old golden doodle full of all that puppy energy and curiosity.

She’s working on her learning her manners, commands and to handle human touch.

“A couple times a day I will pull her tail, play with her ears, her paws, her feet. Anything that a small child might do to her, I’m just getting her used to that and that she tolerates it,” explained Lieutenant Michelle Day.

After that, she’ll head to Florida to attend Paws and Stripes College for national certification.

It’s important because soon, she’ll have a very big job.

“She’s supposed to buffer the stress response. Not only for the officers at the department but especially for the victims,” said Day.

Lieutenant Michelle Day has been with the police department for nearly 10 years.

She works in the special victim’s unit, handling abuse, neglect, sexual assault and any crimes against children and the elderly in North Tonawanda.

Getting people to open up is hard.

“It can be difficult at times because you’re asking them to tell you their deepest darkest secrets,” said Lt. Day.

The idea to bring Remy onto the force began when Lieutenant Day found herself in a tough situation, trying to get a child to tell her story.

She was already thinking about getting another dog, so she asked the little girl to help her pick out a puppy.

That’s when things changed in an instant.

“She stopped crying. We went through all 8 puppies. We kind of went through which one she liked, curly haired, straight haired and she eventually calmed down enough so that I could get a statement and continue on with the investigation,” said Lt. Day.

Lt. Day didn’t just want a new dog for her family, she wanted one that could help the public.

“She approached me about the idea and I let her go with it and you see the result… the new face of the NT police department,” said Chief Krantz.

Remy comes at a time when police departments across the state are implementing new reform measures under the executive order of Governor Andrew Cuomo.

North Tonawanda is working to ease tension and gain trust between their officers and the community they serve.

Chief Krantz believes his department is setting an example.

“I mean, you see how everyone reacts with dogs. She’s going to break the ice and people are going to see us as not just police officers. We’re not there in a negative way, this will bring a positive so people can see us in a different light,” explained Chief Krantz.

“Ice breaker” might be her nickname… but you could argue she’ll be doing a little more than that.

Like most dogs, Remy provides a sense of purpose and takes away the constant worry and stress of what we’re all experiencing these days.

“She alleviates some of that,” said Krantz.

Whether in the office, or patrolling the streets — her service comes during a time, when a little puppy love is needed the most.