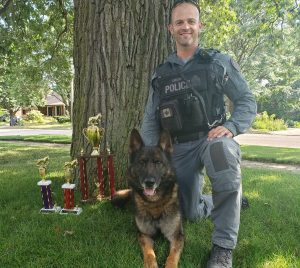 Guelph police say Charger — one of their K9 officers — is retiring after 10 years of service.

The German shepherd has been paired with Sgt. Andrew Crowe since his arrival in Guelph in July 2011 and was trained in a variety of tasks including tracking, searching, drug detection and detection of currency.

Charger has been involved in the location of dozens of suspects over the course of his career, police said in a news release.

In various events, Charger has ranked first place in tracking, second place in evidence search and third place in agility.

In November 2019, Crowe and Charger competed at the national level event in Florida.

The service said Charger will be living out his retirement years as a member of Crowe’s family.

The police service has announced two new police dogs, Titan and Jett, who have been paired with two officers.

The new pups are the service’s ninth and 10th police dogs.