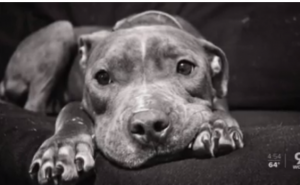 CINCINNATI — WCPO first introduced you to Promise in November 2019, when she was on the mend from being rescued.

“We found her abandoned at a home with a lot of evidence of dog fighting there,” Mandy Franceschina, owner of Rescued & Ready said. “She was the only alive dog we found on the premises.”

Franceschina had a goal to rehab and possibly train Promise, the gray pitbull-type dog, to be a service dog to a veteran as she’s done in the past.

Without the right skills, the focus turned to making Promise a comfort animal for a veteran instead. After one match-up fell through, Promise was discovered by an Army veteran almost 300 miles away in Lansing, Michigan.

“I was just thumbing through Facebook one day and I saw her picture — the one picture with flowers on her head,” Theresa Bousson said.

It was love at first sight, according to Bousson.

“I thought, ‘Oh my goodness, she’s so precious I have to see whose dog this is,’ and then I started reading her story and then was like … ‘aww,'” she said.

After applying to officially adopt Promise and undergoing a home visit, Promise was on her way to Michigan.

Promise has already started changed Bousson for the better.

“First of all, with everything going on, she has been a wonderful companion to me because me in this house — I have severe depression — it wouldn’t be working,” Bousson said.

Franceschina credits the veteran community with helping her find Promise a forever home by sharing her story online.

“We started reaching out to veteran groups and lot of veterans even reached out said, ‘My family is not the right fit, we have other dogs, we have small kids, whatever, we have cats, but this is awesome. Let me spread the word,'” Franceschina said.

Bousson said Promise is helping her in ways she didn’t even think about — from mental health to wellness.

“We’ve been doing about two to three miles a day,” Bousson said. “She needs it and I need it.”

For Franceschina, it’s another successful placement — another Promise fulfilled — with dreams of rescuing more pit bulls to help other veterans across the country.