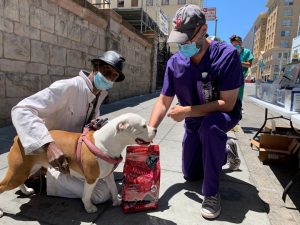 COVID-19 has not only been hard on people, but on their pets as well.

Christine Worrell is homeless and living in a tent with her constant companions, two small service dogs named Lucky and Sephora.

They’ve come to Pets in Need at the Gospel Rescue Mission in South Stockton for vaccinations.

“She’s had all of her shots she just needs a rabies up-to-date,” said Worrell. “I had her since she was in her mama’s womb.”

Pets in Need operates out of a 38-foot RV, which started traveling in mid-May to California cities. It offers free veterinary care mostly aimed at homeless people like Jennie Garza. Her dog is suffering from a nose infection.

“Most of the vets in Stockton right now aren’t taking people in, and yeah, they’ve gone up in their pricing and everything else and when you’re homeless, you have problems there,” Garza said.

Dr. Amanda Howland’s company is paying out of its own pocket for the service. She spends several days in different cities in the poorest part of town.

“Most of the people we see simply can’t afford a vet under any circumstance,” said Howland. “They feed their pets ahead of themselves. They do everything for their pet but it’s too much of a stretch.”

Howland says people have waited in line for as long as seven hours in some cities.

And they’re doing it all for their pets, like Christine Worrell and her two dogs.

Pets in Need will operate at the Gospel Rescue Mission at the cross streets of E. Church and S. San Joaquin Streets in South Stockton between 9:30 a.m. and 1:30 p.m. Thursday and Friday.

The mobile relief effort is driving to Los Angeles, San Diego, San Francisco, Stockton, Modesto and other California cities. They hope to help more than 1,000 animals with services and supplies by the middle of July.