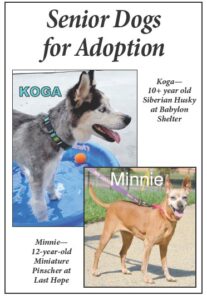 Big dogs, big findings. When is the best age to spay or neuter a larger breed puppy? The answer’s tricky. It becomes a dog dilemma for owners and veterinarians when trying to strike a balance between controlling pet overpopulation with early altering, and health concerns caused by performing the surgery too early.

Bigger Mixed-Breed Dogs Have More Joint Disorders If Neutered Early. This conclusion from a study at the University of California-Davis was published this month in the journal Frontiers of Veterinary Science. Research found mixed-breed dogs weighing more than 44 pounds as adults are at a higher risk for one or more joint disorders if neutered before one year of age. Dogs weighing up to 43 pounds had no increased risk for joint problems.

It’s standard practice in the U.S. and much of Europe to neuter dogs by six months of age. This study, which analyzed 15 years of data from thousands of dogs at UC Davis Veterinary Medical Teaching Hospital, suggests dog owners should consider their options carefully. The decision of the best time to alter a puppy is complicated by humane organization goals to reduce homeless pets. During the last 20 years, many shelters and rescues began performing pediatric spay/neuters of puppies as young as six weeks so the pups will never add to dog overpopulation.

“Most dogs are mixed-breeds,” said lead author Benjamin Hart, professor emeritus at the UC Davis School of Veterinary Medicine. “We hope this study will influence the spay or neuter process in order to give people wishing to adopt a puppy the time to make an informed decision on when to spay or neuter.”

Again, most mixed-breed puppies are adopted from shelters and rescues, except for large breed designer dogs like Golden doodles or Labradoodles, which are mixed-breeds often purchased from pet stores. It has become regular practice now for municipal and private shelters to require puppy spay/neuter before adoption.

Pet store customers would have the option of deciding when to neuter their pup; as would people who acquire a puppy from a friend. However, “oops litters” are no longer a common occurrence on Long Island because most responsible owners alter their dogs to prevent “oops litters.” Reputable breeders often require puppies sold to pet homes rather than show homes, be spayed or neutered before the owner is given the pup’s pedigree papers.

The risk of joint disorders for heavier dogs can be a few times higher compared to dogs left intact. This was true for large mixed-breed dogs. For female dogs over 43 pounds, the risk jumped from four percent for intact dogs to 10-12 percent if spayed before a year of age.

This delay in spaying presents another concern about when to spay a female dog because of the risks of mammary cancer. The following has been the medical thinking for a long time: Less exposure to female sex hormones has been shown to be protective against breast cancers in dogs, which is the second most common form of dog cancer. Mammary cancer can be nearly eliminated by spaying a female dog before the first heat. (Typically, the first heat arrives at six months of age and recurs about every six months until late in life.)

Spaying provides less protection for canine breast cancer with every passing heat. Studies have shown that dogs spayed before the first heat have a 0.05% risk of developing mammary cancer, when compared to intact female dogs. If the spay happens between the first and second heats, female dogs still have quite a bit of protection, with only an eight percent risk. If the spay happens between the third and fourth heat, female dogs have a 26 percent risk. Spaying also prevents uterine and ovarian cancers. Neutering a male dog eliminates his chance of testicular cancer.

Neutering Policies May Need to be Reviewed. “The joint issue study raises unique challenges,” noted coauthor Lynette Hart, professor at the UC Davis School of Veterinary Medicine. “People like to adopt puppies from shelters, but with mixed-breeds, it may be difficult to determine just how big the dog will become if you don’t know anything about the dog’s parents.”

Purebred dog owners may have less trouble deciding the best age to alter the puppy. Those who plan to participate in performance sports like agility, dock diving or rally would be concerned about protecting their pup orthopedically and perhaps postpone neutering until the dog matures.

Neutering prior to adoption is a common requirement of humane societies, animal shelters and reputable breeders. The UC Davis authors suggested the policy be reviewed and modified appropriately. They say shelters, breeders and humane societies should consider adopting a standard of neutering at over a year of age for dogs that will grow into large sizes. I feel this would be difficult for shelters to enforce.

Service dogs such as guide dogs are large breeds, particularly Labs, Goldens and Shepherds. “They need to take a serious look at this,” said Hart. “Joint disorders can shorten a dog’s useful working life and impact its role as a family member.”

Aggressive cancer can shorten a dog’s life too. The key is placing intact dogs into the hands of responsible owners to protect an individual dog’s health and prevent unexpected litters.