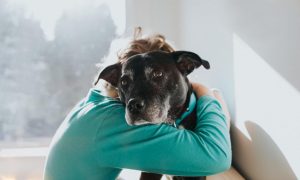 By some estimates, more than half of people globally own pets, and that’s good news for their health, especially now. Researchers, and likely pet owners, know that having an animal companion has benefits for both physical health and mental health. During the pandemic, when many have been confined to their homes without friends and family for weeks to months at a time, having the physical comfort of an animal companion might be particularly beneficial.

“Suddenly, it’s like touch is deadly,” said Janette Young, a lecturer in health sciences at the University of South Australia. “Caring, companionable touch with another being is really vital to us as human beings.” Not everyone is a hugger, but touch is important for health. Positive, human touch experiences are needed for healthy emotional and behavioral development in infants, and can reduce stress and anxiety in humans of all ages.

But because of measures like social distancing, human touch can be hard to come by, and social isolation and feelings of loneliness have increased in adults since March.

But pets might help make up for the lack of human contact, which could explain why demand for pets has soared since the pandemic began. There’s reason to think that pets can mitigate some of the stress and loneliness arising from public health restrictions — and provide that much needed physical touch.

Young researches pet-people relationships, and in her latest study published in the Journal she and her colleagues write that comfort that comes from touching a loved pet could inform policies to promote health and wellness during the pandemic and beyond.

When Young interviewed her study participants (before the coronavirus pandemic), 29 out of 32 of them spoke, unprompted, of the importance of physical contact with their pets. “When you stop and think about it, it’s a bit of a no brainer,” she said. “Animals come to us and they ask for touch and they want to engage with us. That’s like an endorsement of us as people.”

Now that human touch has become somewhat of a health hazard, she says that pets could step in. “Somehow they must work for people, so many people have them,” she said. And the evidence that animals can benefit human health — and perhaps address some of the health risks of loneliness  — is growing. “We know that loneliness is an issue,” said Young. “And animals can moderate that.”

That’s what researchers found in the U.K. In a survey of 5,926 people, nearly 90% had at least one pet, and 86.5% of pet owners stated that their animals provided emotional support during the first lockdown. Although the survey didn’t include a large number of those who don’t own pets, pet owners reported smaller decreases in mental health and smaller increases in loneliness compared to those without pets.

Human-pet relationships aren’t always beneficial. “It’s a lot more nuanced than that,” said Layla Esposito, a program director in the Child Development and Behavior Branch and the Pediatric Growth and Nutrition Branch at NICHID whose work involves human-animal interaction research.

Petting a dog for a few minutes won’t impart the same benefits as cuddling with a longtime pet, but scientists are still trying to pin down what types of human-animal interactions are most helpful for the health and wellbeing of people, as well as animals.

But Young thinks that research on relationships with pets so far points to policies that could improve health and wellbeing. In their recent study, Young and her colleagues write that human-pet relationships could be “bridging the physical intimacy and connection gap for many people at this time.” They suggest that pet support programs in certain healthcare settings could improve quality of life of patients, and clinical outcomes.

“We know that loneliness is a major risk factor for a variety of health and psychological problems. We also know that interacting with animals is something that helps ease loneliness,” said Esposito.

But if nothing else, pets can bring comfort during stressful times. “There was this big explosion of adopting pets during Covid,” said Esposito. “I think that speaks to the ability for humans and animals to bond, get pleasure and have positive relationships in this strange time in our existence, when human contact is discouraged.”