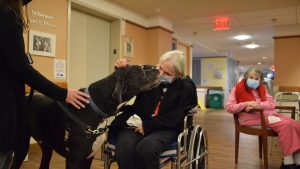 One nursing home in the Bronx has picked up its dog therapy program that was suspended when the pandemic lockdown began in March, giving its residents the affection and physical contact they have longed for.

Zeus and Marley, Redwood, and Kida are part of the pet visiting program at the non-profit long-term care community, Hebrew Home at Riverdale. The dogs that are owned by staff members are bringing unlimited hugs and comfort to its members each day and residents are greeting their furry friends with open arms. Eileen Nagle, 79, looks forward to the visits she get from Zeus, an energetic Bichon Frise, that she calls a “friendly little snowball. “Petting and playing with the dogs breaks up the day and gets you to forget about yourself for a while,” she told the Associated Press.

For the last 20 years, Hebrew Home has had a pet therapy program in place, but with COVID the residents have been unable to see family members in-person with most restricted to virtual visits since March. Earlier this month the program was re-energized.

“Since our campus is closed to visitors, our residents are lacking the comfort and connection of another human being.  Our pet therapy is a bridge or surrogate to that intimate connection that residents long for and need.  It is essential,” said Catherine Farrell, Director of Therapeutic Activities and Enrichment Programs told Inside Edition Digital. “When they pet the dog and the dog responds to them, it serves as a mirroring process where the dog is giving them unconditional love and attention in a positive interaction.”

Farrell said her dog Marley, a great dane, loves her frequent visits to the nursing home.

“He enjoys interacting with the residents. I believe he knows that he is bringing them joy and that makes him happy,” she said.

Resident Elizabeth Pagan, who is recovering from a stroke, and misses seeing her children, grandchildren, and terrier-dachshund mix Ruby looks forward to the doggie visits.

“It means a lot to me, makes me feel good when I pet the dogs,” said Pagan who has only been able to see her family through FaceTime visits. “My favorite is Marley. He gives me a lot of comfort.”

Farrell said cats are also in the pet therapy program — but only robotic ones. The animatronic cats appear lifelike and purr and meow as residents hold them in their laps and stroke their fur. Farrell said the cats are especially soothing to people with dementia, the AP reported.

Daniel Reingold, founder of the pet therapy program and president and CEO of RiverSpring Health, nonprofit operator of 103-year-old home, got his rescue dog Kida, a chocolate Labrador retriever, involved.

“They’ve been on the floors bringing happiness and unconditional love to residents and staff alike,” Reingold told the AP.

Not every dog is eligible. The dogs involved in the program have to have the right temperament, according to Reingold.

“The dogs have to be assessed, follow basic commands and be able to cope with wheelchairs, elevators, medication carts, and all the other things they’ll encounter on a floor,” he said.

Kida wasn’t the only exciting new addition since the program started up again, Redwood, a mini poodle, has been another new recruit. Her first day on the job was Dec. 9 and according to the staff, she brought lots of joy.

Jeff Phillipson, 80, told the AP, “It’s uplifting to have Zeus come and visit me, especially with COVID and being restricted to my room.”

Farrell said that the best part about the pet therapy program is that the residents are able to interact with animals who may trigger memories of pets that they have had in their past histories.