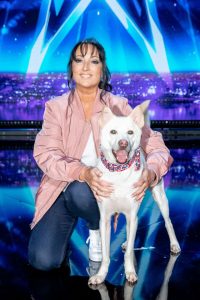 BRITAIN’S Got Talent sensation Amanda Leask has revealed how her rescue dog Miracle has now become a global superstar.

The 50-year-old mum from Inverness sailed into this weekend’s semi-final with her adorable pooch after making head judge Simon Cowell cry.

But she’s revealed Miracle – who was saved from slaughter in a Thai meat market – has touched the hearts of well-wishers far beyond these shores.

She says: “I recently did an interview with a journalist on the other side of the world who’d watched our performance.

“Our story was timed to go out when the horrific Yulin Festival takes place – our story reached approximately 53 million.”

The gruesome Yulin Festival is held every year in China where festival goers eat dog meat with lychees.

And Amanda’s glad BGT has allowed her to turn the spotlight on the grim trade in canines in the Far East.

She adds: “Raising awareness is so important because it’s so surprising so many people are still unaware.

“BGT has been the most amazing platform to highlight the dog meat trade and shown such compassion to help us get this message out there to the masses.

“Ignorance is not bliss, it means the suffering continues. “But the response to our performance has been amazing. So many people reaching out to enquire how they can go about adopting and who to support? Who to donate funds to?”

However this weekend both owner and pet will be focused solely on making the final after leaving panellists David Walliams and Alesha Dixon spellbound with a card trick.

Amanda, who lives in Inverness with champion sled dog racer husband Tobias, 44, and Kyle, 11, who has cerebral palsy and autism, says: “To reach the final is an absolute dream.

“I’m so incredibly proud of my son, of Miracle, and all my animals who’ve all endured so much. So, the final would change lives all-round.

“What we can certainly promise is an emotional performance and something BGT viewers have never seen before.”

Amanda insists life hasn’t changed for her family and their menagerie of animals back home in Scotland, despite their newfound fame.

She says: “For Miracle, life’s more or less the same. Given we’re in the countryside surrounded by fields and nature the local wildlife is all we bump into.

“The birds, deer, badgers and foxes have given him the nod of approval. He’s generally just happy going about life as normal being with his little human Kyle, us and the rest of his pack.

“Although he does get excited when he sees me pack his bow tie collars. He realises we have a trip and it’s his time to shine and be superman on stage.

“He loves the spotlight and adoration I’m sure of it. He knows and feels he has a purpose and that’s important for any dog.”

But Amanda admits she already feels like a winner by highlighting a cause so dear to her heart. She says: “If I can do this and strive to make change, others can do as I’ve done.

“Or they can find a way they’re comfortable with whether it be adoption, fundraising, fostering, or sharing posts on social media.

“Just sharing a post takes seconds but can lead an animal to their future home. Social media is powerful and brought not only Miracle, but all my rescues home.

“He’s now known as ‘The dog who refused to die.’ He blossomed over time and now gives hope to those who fight against this horrific trade that simply has to stop.

“Miracle is such a compassionate little soul bringing comfort and emotional support to my son. Neither have a voice, but they have mine.”

She adds: “But who would ever have thought a little dog who was traded to be someone’s food and whose life was considered to be worth nothing could have one of the biggest platforms possible.

“Miracle is raising awareness through his suffering and reaching the eyes and ears of people worldwide has the power to change lives.”