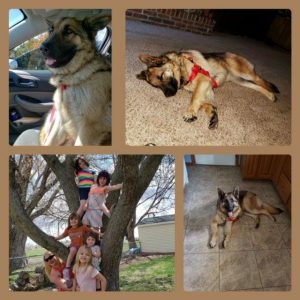 My husband and I have decided to write a few articles about some of our adventures we have had while trying to catch dogs.

Over the next few months, we will write an article here and there about a rescue we have been a part of.

Today, I want to tell you about Layla the German shepherd. Sarah had found her on an Adopt A Pet site and they had driven that morning to Nebraska City to get her. They stopped in York to grab a bite to eat on their way back to Grand Island. Layla was scared and bolted out of the car the minute she had a chance. Sarah scrambled and found phone numbers for the sheriff and the shelter. We received a call and I headed out immediately to look for her.

My first stop was Petro. Layla had crossed the interstate and made it to Petro. I looked all over but did not see her. When I got back to the shelter, I saw a post on the Missing and Found Pets in York, Nebraska Area site on Facebook.

The post said Layla was at Starbucks’s and was headed to Holthus Convention Center. I jumped back in the car and headed back out. I met the animal control there and we drove around trailer park and the Ford dealership as well. In time, we headed back in because I needed to get back to work. I knew there would be another siting and I hoped the next time I could see her and hopefullycatch her.

A couple hours went by and I heard from Sandra Chapin. She said her daughters and her were following Layla and she was close to the interstate. Tom and I were at the shelter putting the dogs to bed for the night and I said give us a bit and we will be out. We called on our way and they said they had her in the ditch on the north side of the interstate. They also said she was very scared and showing her teeth.

We got out there and there were so many people that they had made a circle around her so she would not escape. Sandra’s adult children were there helping and a truck driver had stopped, and others too.

Layla was very scared and we tried to get her to go into a vehicle just to get her safe and then get her leashed after she was in. She was too smart for this game. She was not getting into that strange vehicle. So my husband Tom, got on the ground and slowly crawling closer to her. I had my worries at this point because she was super scared. It took some time and Tom had to get up a couple more times and move in the direction Layla went but he finally leashed her with the loose leash he had. The minute she found she was caught, she freaked out a bit and then as quickly as that happened, she settled down.

I left Tom in the ditch with Layla after everyone left, so I could get my car that I had left on the south side of the interstate. Then I went to pick them up but of course my car was strange to her as well and it took us a bit to get her in the car. Once in the car we headed towards the shelter. I told Sarah we would let her decompress overnight and she could pick her up in the morning. I also said please bring, two leashes, a collar and a harness. I did not want a repeat of this event.

Sarah shared some things with me through email and text messaging since that day they picked her up. It was a slow start as Layla was very unsure why her life had changed so much. Sarah said, “Layla now does great in public and doesn’t scare near as easy. She was unsure about the doggie door we had, and must have not thought it was not sturdy enough in nature. The reason I know this is when I peered out the kitchen window, I found the plastic in at least six pieces in the back yard. Apparently, she approves of the new custom-made frame doggie door held together by carriage bolts, because it is still there. She has also found a love, Scary Terry who is a black and white cat and another furry friend Hanako, an Australian Shepherd. She also has a herd of little girls she enjoys very much. She is becoming a service dog as well and it has been hard work!”

I am happy this all turned out so well and am thankful to Sandra Chapin and her family for helping us that night and many other times as well. A big thank you to my husband Tom who is so generous to give his time to help and for always being so good with the scared dogs. Thanks so the truck driver and everyone else who helped that night. We had a great ending to Layla’s story thanks to all of you!