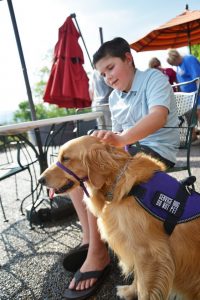 This was a four-person scramble for all skill levels and there were prizes for each golfer (gift cards donated by 75 area businesses), as well as skill contests.

Walt Focht won the putting contest. Courtesy Motors offered a new Ford EcoSport to the first person to get a hole in one. No one met that challenge; however, a runner-up prize was awarded to Randy Isenberg who got within three feet of the pin.

Doug Field won the 50-50 drawing and donated all his winnings back to Service Paws.

Service Paws of Central PA is a local nonprofit organization established to financially assist those in need of a service dog, and/or those who may already have a service dog and need help with extraordinary veterinary expenses.

The golfers enjoyed a relaxing dinner on the patio at Park Hills, where the prizes were distributed.

The highlight of the day was presentations from three service dog handlers, which were sponsored by SPCP. Each of them had a compelling and heart warming story of how the dogs impacted their families (i.e. PTSD, anxiety attacks, peanut allergies, etc.).

A net profit of almost $10,000 was reached thanks to the help of those listed below.

“A special thanks to Chad Krawczyk, Park Hills pro, Sheetz store No. 187 for providing lunch, INCO Beverage of Johnstown, Galliker Dairy Co. of Johnstown and Altoona Soft Water for being beverage sponsors and Blair Candy Co. Inc. for donating snacks,” said Joe Fagnani, chairman of Service Paws of Central Pennsylvania, who said the event was a success.