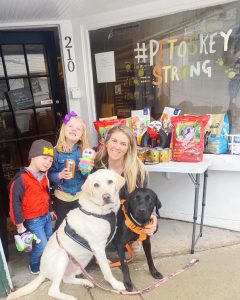 PETOSKEY — Food pantries and meal programs have been in the spotlight in recent weeks as Northern Michigan communities adjust to life under quarantine, but one Petoskey-area business owner wanted to make sure cats and dogs weren’t being left out.

“We started to try to think of ways to help out our community,” Schlehuber said. “We actually specialize in using products that are cruelty-free and are not tested on animals. Having a helping hand to our furry friends was really natural.”

Schlehuber, who has two dogs at home, said she did not want families facing economic hardships to have to choose between feeding themselves or feeding their pets.

“Especially with families that have service dogs and emotional support dogs and that kind of thing,” she said. “With it being so close to our heart and so easy for us to implement, that’s kind of where we decided the curbside pet pantry would work.”

The pantry, located outside the salon at 210 Petoskey St. in downtown Petoskey, allows pet owners to access supplies anonymously and with ease. The pantry is open 24/7, and pet owners can simply take what they need.

However, as the weeks went by, Schlehuber said she saw many people making an effort to leave items for others.

“This was something that we stocked ourselves and then as we started telling people about it, they were starting to drop off food and stuff,” she said. “Then I started to see people that were buying an extra bag of dog food, cat food and then cat litter actually became a big need in the community, too. People have just been leaving what they can and taking what they need and it’s just been like a community self-serve area.”

Schlehuber added that Tractor Supply Co. in Petoskey has gotten involved and donated hundreds of pounds of dog food, cat food and cat litter to the pantry.

“Tractor Supply has been a big business partner with it,” Schlehuber said. “They just restocked again just (Monday) … That’s the only company that we have had reach out so far that has donated. Most of it has been community members.”

As word has spread about the pet pantry, Schlehuber said she has been getting messages expressing thanks, has seen people taking pictures or stopping by with their dogs during walks and sharing information about the pantry with others.

“They’re loving it. It’s got the element of just joy, especially when we’re talking about our pets. It’s something that is creating so many smiles,” she said. “It’s been a fun project.”