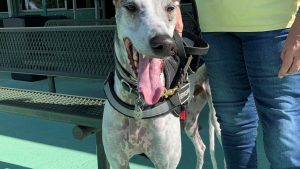 With the end of greyhound racing in Florida on the horizon, officials from both Palm Beach Kennel Club and Greyhound Pet Adoption say their goal is to get every greyhound adopted after their racing days are done.

Dec. 31 marks the final day for greyhound racing in the Sunshine State after Florida voters overwhelmingly passed an amendment in 2018 to end the sport.

“That’s gonna be the goal; to get 100 percent [of the greyhounds adopted],” says Pat Rooney, Jr., the President of Palm Beach Kennel Club in West Palm Beach. ” I’m really confident we’re gonna get there.”

Rooney, Jr. says Palm Beach Kennel Club takes great pride in working with the kennels, owners of the dogs and groups like Greyhound Pet Adoption Southeast Florida in order to ensure each and every dog goes a loving and appropriate home.

“We say greyhounds are like potato chips. You can’t have just one,” jokes Jeff Cole, President of Greyhound Pet Adoption in Southeast Florida.

“When you bring them into your home, they appreciate everything you do,” Cole continues. “They are brilliant animals and they make wonderful companions.”

Cole, who has headed Greyhound Pet Adoption in the area for the last five years, encourages families looking into adopting a pet to consider retired racing greyhounds.

“There’s a non-verbal connection that you have with them. The demeanor of them. They’re loyal to you.”

Cole says as the deadline approaches, the amount of families looking to adopt the dogs has skyrocketed not just in Southeast Florida, but across the entire country.

“There is plenty of demand and supply,” says Cole. “I have a feeling the supply will run out before the demand.”

Much like Rooney, Jr., Cole acknowledges that some dogs at Palm Beach Kennel Club will travel to other states to continue their racing careers, but the expectation is to get as many as possible adopted.

Ante Up, a three-year-old retired racing greyhound, is the perfect example. Ante Up now serves as a service dog for his owner, Phyllis Alasia.

“He’s a goofball when he’s off duty,” Alasia says of Ante Up, who previously raced at Palm Beach Kennel Club.

Alasia’s advice to those considering adopting?

“Give them time when you get them. They’re like a new puppy coming into your home,” Alasia says. “They need your patience — just for a few weeks — and then they try to take over! They’re wonderful companions and pets.”