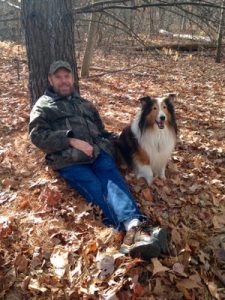 Until then, Walker lives with the undercurrent of grief over Sully’s death two years ago at age 13.

“I think about him every single day. The grief is terrible and there’s something deep in your heart, you know this isn’t the way God planned it. This kind of love should not be separated,” Walker said. “There’s a spiritual bond between a pet and its owner that transcends beyond that between humans.”

There are many people who understand that bond Walker references, and there are other people who just don’t get it at all. But losing a beloved pet can be emotionally and physically debilitating, often equal to the grief of losing a human loved one.

Micky Golden Moore of Oakland County does get it. She started Beyond the Paw Print Pet Loss Support Group in 2009. She wanted to validate the grief and let grieving owners know they’re not alone. The support group continues to grow in popularity, even though the monthly meetings have been conducted on Zoom rather than in person since the pandemic began. She has also now penned a book on the topic: “Tails from Beyond the Paw Print.” “I know people have greater losses during their lifetime than the loss of a beloved animal, but that is why there’s this group because people understand that other people don’t understand,” Golden Moore said. “We don’t have to compare losses or how big the wound is in each of our hearts. We’re both grieving and need a hand to hold.”

Last Sunday, Prince William and Kate Middleton announced their dog, Lupo, passed away earlier this month. The Duke and Duchess of Cambridge posted on Instagram a photo of the dog and wrote, “He has been at the heart of our family for the past nine years and we will miss him so much.”

The duchess’s brother, James Middleton, also shared a tribute via his own account, saying, “Nothing can ever prepare you for the loss of a dog. For those who have never had a dog, it might be hard to understand the loss. However for those who have loved a dog know the truth: a dog is not just a pet; it is a member of the family, a best friend, a loyal companion, a teacher and a therapist.”

Golden Moore said the royal couple’s openness about their feelings over the loss of Lupo helps bring awareness to the pain of losing a pet. “It gives us tremendous legitimacy and it’s a tremendous validator to our group,” Golden Moore said. “He was a little boy when Princess Diana died and he was so loved. So for him to express his grief — because he lost his mother — to say he’s heartbroken for having lost his animal companion, what can be more legitimizing?”

For Lindsay Hadden of Livonia, the royal couple’s story resonates.

Hadden adopted her dog, Knuckles, as a puppy in 2007. A military wife at the time, Hadden quickly made Knuckles her daily companion as her husband was deployed to Iraq and Afghanistan. In the royal couple’s case, they adopted Lupo so that Middleton would have company when Prince William was away, published reports said.  Hadden, who now works for the Michigan Humane Society, formed a deep connection with Knuckles during their decade together. He was her companion, child and protector all in one. So when she had to euthanize him in 2017 at age 11, she was heartbroken and eventually hit a point where she “was so exhausted from the loss and grieving, I didn’t want to live anymore with the pain.” So she did something about it.

Her therapist suggested she find someone who specialized in pet loss grief. In 2018 she started going to Beyond the Paw Print meetings. She said they helped her accept the loss and embrace her emotional capacity to love again.

“I’m not scared of adopting another dog someday. It helped me work through the guilt that I had of, ‘Should I have done this?’ ” she said, referring to her decision to euthanize Knuckles. “But I realized I loved him so much and I couldn’t have given him a better life.”

So when she saw the royal couple’s announcement, she read it and cried.

“I am glad to see it promoted because there are so many people grieving in silence,” Hadden said. “I was in the animal rescue world and I didn’t know this support group existed.”