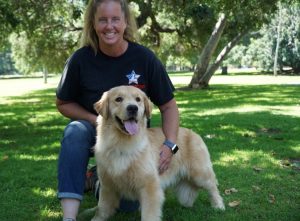 The Independence Service Dogs Foundation, an Orange County non-profit organization, helps facilitate service dog training. But due to the COVID-19 pandemic, they have paused many of their services at a time when they are needed most.

Co-founders Justine Puliafico and Nikki Esser created the foundation in 2018 to supply well-screened and properly trained therapy dogs to assist military veterans, victims of domestic abuse and disabled individuals, among others.

However, due to social distancing orders, they are unable to offer their usual therapy services at the Ronald McDonald House, the Angels Stadium or local schools. This includes a comfort canine program where young kids who are struggling to read can read to therapy dogs.

“People are out of their routines, which is hard. People aren’t able to go to their therapy, so the dogs there are a big major help as far as lowering the stress,” Esser said.

Esser hopes to lift people’s spirits by walking therapy dogs around her neighborhood and allowing them to comfort people in their homes using a long leash.

Esser has worked with veterans and people with disabilities for twenty years, giving her the experience and passion to join Puliafico in creating the Independence Service Dogs Foundation. She said it’s a great opportunity to help people regain their independence.

Esser is the head dog trainer and Puliafico handles the administrative aspects of the foundation. Esser also works at OC Service Dogs, a company that trains service and therapy dogs. Both Esser and Puliafico also teach basic obedience to other dogs.

Puliafico won her dog, Wally, at a charity event, and he came with a lifetime of training. When she and Wally attended training she met Esser who suggested she train Wally to be a therapy dog.

“At the time, I knew what service dogs were just from seeing seeing-eye dogs because they’re obvious. I didn’t really understand all the intricate parts and ways that a dog can help a person with independence,” Puliafico said.

Wally is now a certified therapy dog who assists patients and their families at Choc Hospital by lowering their stress levels before they go into surgery. Puliafico said that petting a dog just a few times can reduce stress levels.

Puliafico said that as of now, the foundation has two dogs who have graduated, and a third dog who is still in training. Unfortunately, it takes a lot of time and money to train service dogs, making it incredibly difficult to provide service dogs to those who need them.

Esser said that it takes about two years of training, averaging around at least 15,000 hours.

“Typically, a service dog costs between $30,000 and $35,000. And if you’re just struggling to get out of bed, the chances of you having that extra income to allow yourself to get that type of dog is probably not good,” Puliafisco said.

In addition to training dogs, Esser and Puliafico make an effort to fundraise. Puliafico said that the need for service dogs reaches further than their ability to help every single person.

Service dogs assist in activities such as opening doors, retrieving items and turning lights on and off, said Brianne Hosford, Independence Service Dogs Foundation’s public relations specialist. Hosford said that because of the time and cost, 70% of disabled individuals who need service dogs cannot afford them.

By working with Esser for over a decade, Puliafico saw the value of her work at OC Service Dogs and wanted to give those who are unable to fund a service dog the opportunity they deserve. She also admired Esser’s effort in not only training the dogs, but also building a bond between a person and their service dog.

“I love seeing the connections between the human and the dog and just seeing how it can make such a difference in anyone’s life,” Esser said. “Just that bond — it’s really amazing.”