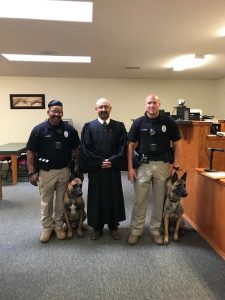 The Carlsbad Police Department announced the retirement of one of it’s officers.

“He has been diagnosed with a degenerative bone condition and has been suffering from a lot of pain due to the rigorous physical regiment they have to maintain through training and normal service,” Skinner said. Support local journalism.

He added Alf had a proven history of narcotics detection.

“His wonderful demeanor and outstanding work will be missed,” Skinner said.

While Alf is retiring with his current handler Cpl. Chris Chacon, a new service dog named Alex is set to join the team, according to the news release.

A donation of $20,000 from Chevron along with contributions from residents Wayne and Sara Ballard, Ray and Karen Westall, George and Nancy Brantley, Valerie Murrill and several donors who wish to remain anonymous, the press release read.

“Chevron has a philosophy of giving back to the communities in which the company operates,” said Beverly Allen, community affairs representative for Chevron-Mid Continent Business Unit.

She said Chevron has donated to the Carlsbad community through various nonprofits, including the Carlsbad Community Foundation and the Carlsbad Boys and Girls Club.

“Our collaborative approach to partnership enables us to work with the organizations to determine what is needed and how Chevron can help,” Allen said.

The City of Carlsbad’s K-9 program was reestablished in 2017, under the direction of Carlsbad Dale Mayor Janway, the release read.

“This year the Mayor of Carlsbad and Chevron discussed options for our social investment funding to the City and that is how the K-9 police dog option came forward,” Allen said.

“Following our internal processes, we submitted the funding request and expect the City to receive it sometime in early or mid-July.”

Alex is expected to complete several months of coursework with Chacon he will join Aris and Nia, two other members of the K-9 unit.

All three dogs are Belgian Malinois, per the news release.

“Chevron’s assistance to this community has always focused on safety,” Janway said. “We know we can count on them to help us and always will be able to do so.”