Molly And Her Service Dog 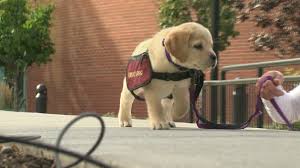 Two and a half-year-old Molly Chow is surrounded by a loving family of her mom Susan, dad David, and four siblings.

The couple moved to Medicine Hat from Vancouver in 2006 and made the decision to become foster parents.

They’ve been fostering for the last 14 years and their family has grown in a big way.

“And in that time we have adopted all five of our children and range in age from 13, 12, six, three and a half and two,” David said.

Molly arrived as a foster child when she was just five weeks old and was officially adopted by the family in June of this year. Susan says Molly was exposed to drugs and alcohol during pregnancy which has had a significant impact on her development.

“Delayed speech skills, she has sleep association disorder which means she doesn’t sleep at night, she has self-harm when she gets upset or dysregulated she will self harm herself by hitting herself or biting herself or hitting her head into the floor,” she said.

Wanting to improve molly’s quality of life, an idea came to the family by chance while out for a walk with their family dog.

David says usually walks wouldn’t go well or last long as Molly would either wander away or dysregulate.

“When we allowed her to walk our older lab she calmed down and was focused and instead of going 200 metres, we actually went 3 kilometres and she did very well and so that’s when we thought maybe a service dog would be of assistance to her,” he said.

Now the Chow family is embarking on the journey of getting a service dog for Molly.

The pups were undergoing some training at city hall on Thursday

The dog selected as the best fit for molly will be trained for her needs and the family hopes the dog can prevent self-harm.

And even support Molly during the night, “For the sleeping part, we’re hoping that the puppy will calm her so when she does wake up she doesn’t hurt herself, the puppy will be able to be with her and calm her down so by the time we get there she’s not hurting herself.”

The service dog will live with the Chows while it spends the next year learning basic obedience, followed by a year of training for Molly’s needs.

By starting Molly with a young puppy, the bonding will begin right away according to Aspen Service Dogs breeder and team leader in Medicine Hat Natalie Gillespie.

“And they almost start helping right at the beginning even though they’re not fully trained yet, their little person will respond very readily to the fact that their pup is going with them and so they’re going too,” according to Gillespie.

But this peace of mind and assistance for the family comes at a cost.

A service dog is $10,000 dollars which includes training. Aspen Service Dogs are accredited and recognized by the Alberta Government.

To help offset some of the cost, the Chow’s friends at Midnight’s Trail are holding a fundraiser on Thanksgiving Monday.

Just in time as the chows are scheduled to welcome the pup into their family later this month.

The Cowboy Challenge benefit for the Chows is on Monday, October 12 at Midnight’s Trail.

There will be horse obstacle courses for kids, youth, and adults.

It also includes a barbecue, silent auction, pony rides, and beef on a bun supper.

Owner of Midnight’s Trail Jessica Tory says she met the family three years ago when their oldest daughter started coming out for riding lessons.

“When they realized that a service dog could be really helpful for her and there’s quite a huge expense to a service dog, we thought we’d like to help out as much as possible with that,” Tory said