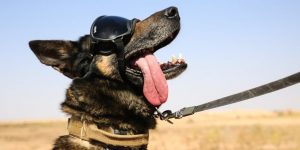 Dogs are man’s best friend, but war takes that special bond to another level. Out on the front lines of brutal armed conflicts half a world away, US soldiers count on their canines to keep them safe from hidden threats and get them back home alive.

One of many dangers on the modern battlefield is improvised explosive devices, crude bombs that can be disguised as everything from part of a car to roadside trash, but US explosive detection dogs are trained to find these deadly weapons before disaster strikes.

Army Sgt. 1st Class Robert Citrullo, the kennel master who supervises the service’s 8th Military Working Dog Detachment at Fort Drum, told Insider that a dog he deployed with named Uran “definitely saved not only my life but multiple other service members’ lives by finding IEDs and other things that were just ready to go off and hurt someone.”

He said that soldiers feel better having the dogs around. “They know the dog has been proven. [The dog] can find explosives, and they know it is going to keep them safe.” Hunting down explosives and other threats obviously comes with serious risks for the working dogs and their handlers.

“We’re on the front line most of the time,” Army Sgt. Kristin Vanderzanden, a squad leader and patrol explosive detection dog handler at Fort Polk, told Insider. The stakes are high. If an IED or a booby trap goes undetected, then the dog, maybe the handler and possibly others could be wounded or killed.

The handlers and their dogs also have to worry about the many other horrors of war.

“One of my teammates went out on a mission with his dog, and they got hit by a suicide bomber,” Vanderzanden, who deployed to Afghanistan, said.

“They were seriously injured,” she said. “We didn’t know if either of them was going to make it.” Both lived, but the dog ended up losing one of his rear legs. The dogs that end up serving in the armed forces start their training early, usually around seven to eight months old, at Lackland Air Force Base, which is also where US service members go to learn to be handlers after mastering other soldiering skills elsewhere.

Military working dogs can be taught a variety of complex skills, everything from finding narcotics and explosives to engaging enemy combatants. A dog named Conan made headlines last fall for his role in a special forces raid that resulted in the death of ISIS leader Abu Bakr al-Baghdadi.

Before a handler ever gets paired with one of these dogs, they get assigned an ammunition can that serves as a pretend dog for practicing commands and leash control.

Citrullo explained that putting an inexperienced soldier with a specially-trained military working dog would be like training a new recruit on a fully-loaded rifle. “It’s too much of a safety risk,” he told Insider, adding that improperly handling a military canine risks the animal or the handler getting hurt.

A dog, of course, is much more complicated than a rifle, as each dog is different. Strengths, weaknesses, and how the animal interacts with the handler can vary greatly depending on the dog’s breed, age, experiences, and personality.

“I never thought he would get so attached to me,” he said.

If he leaves, even for only a few days, Fox’s “whole character changes,” Ramos said. “I have to check on him periodically, even through a long weekend, just to make sure he’s eating.” He has to be sure Fox is healthy and performing as he should because the animal is his responsibility.

“Not only do you have to worry about your own soldier tasks, but you have this extra equipment on you that needs attention as well,” he said. Everything he does, he has to take the dog into consideration. “You can’t just think about yourself.”

A working dog is “Army equipment that literally has its own brain and can choose not to work correctly just because it doesn’t want to,” Citrullo told Insider. “You can do everything correct with your military working dog and the dog could still choose to not do what it was trained to do.”

Handlers work with their dogs daily, building a relationship and getting to know the animal, learning its likes, dislikes, needs, abilities, and limitations.

When she deployed to Afghanistan, Vanderzanden made armament decisions based off her understanding of her dog Frenky. She told Insider that she did not carry grenades into combat because Frenky is toy-driven. “I knew if I threw anything, he would be running after it,” she said.

Unlike regular dogs, which may be easily spooked by thunder, fireworks, and other loud noises, military working dogs, which often accompany their handlers during live-fire training exercises, are familiar with the weapons of war and trained not to panic in response to gunfire or explosions. “On deployment, we took mortar rounds, there was sniper fire, there were door charge explosions.” Vanderzanden said, explaining that Frenky’s response was based off her reaction. “If I don’t react, he doesn’t react.”

The nature of the explosive detection job regularly puts handlers and their dogs in harm’s way, with the working dogs often facing some of the greatest risks.

“It’s paws before boots,” Citrullo told Insider. Not trying to be cruel, he explained that while the aim is for the dogs to safely identify threats to the force, if a dog is unfortunately injured or killed by an IED or some other deadly device but it saves the lives of soldiers behind it, “that’s a win for us.”

That being said, the US military has veterinarians available to care for its working dogs and fight for their lives.

“I take care of the animals that take care of our troopers,” Col. Andrew McGraw, a military veterinarian and the director of the Lt. Col. Daniel E. Holland Military Working Dog Hospital, told Insider. “We do our very best for these animals because they are selfless.”

Handlers are trained to provide basic first aid in emergency situations, but for more serious situations, the military calls on the experts.

Military veterinarians treat a variety of ailments, everything from heat exhaustion and gastrointestinal issues to gunshot wounds and IED blasts, sometimes working medical miracles with injured animals. It’s a challenging job, one that demands far more than just caring for wounded working dogs.

Lt. Col. Patrick Grimm, a military veterinarian and a radiologist at the working dog hospital, told Insider that on one combat deployment, he was called up in the middle of the night following reports of an ambush.

He waited for several hours as Black Hawks brought in wounded troops but no dog. When the last helicopter finally came in, it delivered about half a dog wrapped in an American flag. The dog had been hit with an IED, and there was nothing he or his team could do.

“I saw the kennel master from the special forces team that was involved in the mission in the corner,” he said. “I went over to him, and he was crying.” Several US troops were killed. The handler assigned to the deceased dog was alive but had lost his legs.

Grimm said the kennel master asked him to deliver the flag to the handler in the hospital, to deliver the heartbreaking message that his dog didn’t make it. He said that this was one of the hardest things he has had to do.