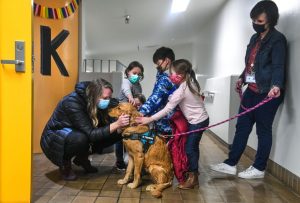 Like the kids at Regal Elementary School, she just wants a hug, and they’re happy to oblige.

COVID-19 has stolen so much from kids this year, including precious hugs from their favorite teacher.

Thank goodness for Lucy, who’s taken up residence in the office of Principal Tricia Kannberg.

A few weeks ago, as kindergartners were returning to Regal for in-person learning, one of them had become inconsolable at the absence of her mom.

As a last resort, the teacher brought the little girl to Kannberg – that is, to Lucy.

“She was hesitant at first,” Kannberg said. “But we let her hold the loop of Lucy’s leash, and she felt better.”

“She thought it was amazing,” Kannberg said.

Lucy spreads joy without trying. One day she was off her leash and wandered into the Regal day camp, where a handful of older students can engage in distance learning while their parents are working.

“One of the students was so excited to see her, he trips and falls and basically tackled her,” Kannberg recalled. “Then she just gets up and lets him pet her.”

On another occasion, Lucy wandered into a room, walked up to a student and made an instant connection.

The timing couldn’t be better. The youngest learners in Spokane Public Schools, kindergartners and first-graders, are finally returning to classes as part of the district’s phasing plan.

Banished from schools since March, they’ve missed out on social interaction for the better part of the year. But in the era of COVID-19, it’s tough to get a friendly pat on the shoulder, much less a hug.

That’s a big void for many kids who live in the low-income neighborhoods of northeast Spokane, and several schools have responded. Emotional support dogs also are being introduced at Holmes and Logan elementary schools.

Emotional support animals are more than just feel-good stories; they have been linked in tests to improved reading and writing levels along with improved motivation and attitude toward learning.

However, there are good reasons why few schools employ emotional-support and therapy dogs: sanitation and the unsuitability of some breeds to work with children.

However, Kannberg saw the need back in the spring, when schools shut down . Years ago, she paid some of her tuition bills at Gonzaga by working for the Spokane Police Department K-9 unit.

Her job? “To put on the large bite suit to help train the dogs,” Kannberg said. “I did that for 3 years.”

Still a dog lover despite that experience, Kannberg, her husband and their twin daughters decided to look into getting a dog.

“We thought, ‘wouldn’t it be nice to have an animal,’” said Kannberg, who connected with a breeder in Rathdrum and met Lucy’s parents.

“They were both so approachable,” said Kannberg, who bought one of the puppies while a daughter took another.

As the school year beckoned, Kannberg tested the waters at Regal.

“We just gradually brought her in, introducing her to people and the building, and that was the most positive thing,” Kannberg said.