Love On A Leash 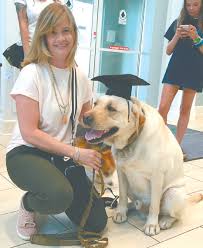 When Dianna Milam’s husband asked her to get involved with hospice patients about 10 years ago, she thought the task might be more than she could handle. Dr. Jeffrey Milam frequently cares for patients who are approaching an end to life. He sees many people facing that circumstance alone, and he thought his wife could meet a need in that area.

It was a request Dianna Milam eventually decided she couldn’t ignore, but she felt the job would be easier if she could share it with the family’s golden retriever, Tyson.

“One of our first outings was to see a very limited Alzheimer’s patient at the end of life. There was a nurse in the room with us. When the patient became aware there was a dog in there, she came out of the fog and smiled and smiled. The nurse burst into tears,” says Milam of that initial experience.

“As for the patient, she was engaged in the moment, and later I realized how profound that was. To know that a dog can bring that kind of love without judgment — they don’t realize someone is sick or has any other issues — is just amazing. That patient felt enough of a connection to become present again for that interaction. So we know the power of it. That’s what gets us out and loving it.”

“Us” includes Lori Carter and her yellow lab, Chance. Carter co-founded the new local chapter of Love on a Leash, which now has four other certified teams, as well. Four additional local teams are finishing their training with the 501(c)(3) charitable organization that was incorporated in 1995 in southern California.

Love on a Leash has 2,700 members in almost all states who make up volunteer therapy teams with their dogs, cats and/ or rabbits.

Milam’s experience with Tyson and the Alzheimer’s patient led to her subsequent connection with the group.

“That allowed us to go as a team and visit people in extreme conditions, and instead of it being heartbreaking and emotionally overwhelming,” she says, “going with a dog provided a beautiful excuse to bring some love into the room. It completely changed the dynamic for me, and I fell in love with volunteering.”

Five years ago, the Milams moved to Gulf Breeze and she found her volunteer place in a new location.

Carter and Chance have their own story to add as part of the local Love on a Leash founding team. Chance “grew up” at Blackwater Prison and was destined to be a companion animal from the time he was a puppy. The goal was to have him become an emotional support animal for a veteran, but Chance developed allergies that made it a challenge for him to fulfill that role. Instead, he found a new home with his “weekend” family — the Carters — and became a part of the Love on a Leash family as a pet therapy dog.

The local chapter has teams that include tiny dogs and big dogs — a Bichon Frize, a boxer, a golden retriever, a big white golden doodle — and even a couple of big Maine Coon cats that are leash trained and that respond to commands.

The two cats are specifically focused on hospice situations. Teams go through a six-week obedience and control class and earn a nationally recognized certification when they complete the final exam. The first step in training is team evaluation to make sure the human and the animal are good candidates.

The human half of each team must be someone who wants to go into situations like hospice, hospitals or assisted living facilities, where interaction can sometimes be challenging.

“You have to know you can have rapport with someone who is not at their best, to be able to draw them out and introduce your dog and help them establish rapport with you,” says Milam. “That’s a beautiful skill that you almost always see in someone who really wants to do this. So they (human Love on a Leash volunteers) are really sort of self-selecting.”

As for the animals, it is essential that they have the right temperament for the work. That temperament is not pre-determined by the animal’s breed, and no dog or other animal is automatically either excluded or included.

As part of their training, the animals are required to “show their stuff” in a variety of settings and to maintain their composure in instances where there is a sudden noise or unpredictable behavior on the part of the people they visit. An example of the latter would be excited children making sudden physical contact or an adult exhibiting out of the ordinary behavior in the animal’s presence.

The training the animals receive prepares them for any situations they might encounter.

Of course, the adults and the animals must have obvious and excellent rapport with each other before they begin to interact with strangers who will become friends.

Prior to the complications of COVID-19, Love on a Leash teams were making visits to The Arbors (they took part in the recent Mother’s Day parade and were thrilled to make contact, even from a distance, with friends they made there in the past), The Beacon at Gulf Breeze, Watermark of Gulf Breeze and Baybreeze Nursing and Retirement in Gulf Breeze. Activities directors at such locations, Milam says, are always looking for ways to engage, and they recognize that residents love animals.

Just before the COVID-19 shutdown, Love on a Leash Gulf Breeze — the name on the local group’s Facebook page — received approval to become part of the special needs classes at Oriole Beach Elementary School. While they are sidelined right now, team members are looking forward to actively engaging there in the future.