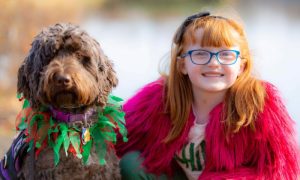 A Kentucky elementary school surprised a 7-year-old student and her mom by including a portrait of the student’s service dog, Ariel, beside her young owner in the kindergarten yearbook.

St. Patrick Catholic School in Louisville, Kentucky, student Hadley Jo Lange suffers from epilepsy, a neurological disorder that causes seizures. Hadley Jo’s service dog, Ariel, a 4-year-old Labradoodle, is trained to recognize when she is having an episode so that she can be attended to quickly.

Hadley Jo’s mother, Heather Lange swears that Ariel has saved her daughter’s life. She praised the pup for providing a “huge sense of security,” CNN reports. “I don’t know how I could ever thank Ariel as a mother,” Heather said. “She goes with her everywhere, to school, rides the bus with her, goes to her dance classes and soccer practice. She always has her eyes on my little girl.” Hadley Jo’s mother thought it was “neat” to see hers and Ariel’s photos side by side in the yearbook on May 15. Heather took to Facebook to share that she felt “beyond blessed,” adding, “It means the world to see your child have a home and ‘a family’ at her school that love her like we do.”

St. Patrick Catholic School’s principal, Nathan Sturtzel told CNN that it was an easy decision to find a place for Ariel in the yearbook. “It’s important for us to do all we can to foster our relationship with families and do what we can to support students,” he said. “[I]t was a lot of fun to include her. We loved it.”

Hadley Jo had her first seizure as a 17-month-old toddler while dining at a McAlister’s Deli with her family. “She was on my lap while I was eating,” Heather recalled, “and out of nowhere my baby fell into my arms and her eyes rolled back into her head and she was jerking … [I]t was terrifying.” “She stopped breathing,” Heather continued, “and there I was, a mother who thought she was about to lose her child.” Hadley Jo has dealt with seizures ever since.

The Langes decided to invest in a service dog after a eureka moment at Hadley Jo’s babysitter’s house. A big German shepherd belonging to the sitter’s son began behaving strangely, trying to pull Hadley Jo onto the floor; Heather believes the dog detected the onset of a seizure, reports The Record.

“That was a turning point,” she said.

If a seizure occurs at school, it is Ariel’s job to alert Hadley Jo’s teacher by barking. The dog then lies down beneath the 7-year-old in order to prevent her from falling and injuring herself.

Heather told CBS News that most of Hadley Jo’s seizures occur in the classroom because fine motor skills, critical thinking, and math trigger her epilepsy. As such, a teaching assistant at St. Patrick Catholic School has undergone formal training to become one of Ariel’s handlers.

According to Heather, Ariel is the only known service dog in the family’s district of Louisville, owing to the fact that service dogs can cost anything between $20,000 and $60,000; the Lange family acquired their life-changing Labradoodle thanks to a six-month community fundraising drive.

Heather, who is a vocal advocate for children with epilepsy, wants to help others secure the service dogs they need after watching her daughter thrive with Ariel. She launched a nonprofit, “Hope for Hadley Jo,”  in partnership with the Epilepsy Foundation of Kentuckiana, which continues to raise vital funds for families with similar needs.

The mom praised St. Patrick Catholic School for making her venture more visible, calling the inclusion of her daughter’s service dog in the yearbook on both the kindergarten page and faculty page a “big deal.”