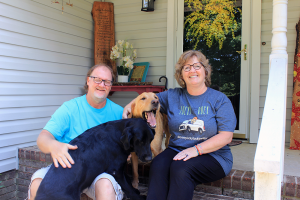 People find hidden gems in life both figuratively and literally. Good ideas can spring up out of nowhere and sometimes you’re forced to take it and run.

Bubba and Wendy Griffin found a gem of idea 14 years ago when their special needs child, Brody, needed a service dog. To raise money for the dog, Bubba decided to start making personalized jewelry, which would eventually become Lucky Buck Jewelry. The name sake of the business comes from the Griffins’ dogs – Lucky and Buck.

It all started in Lewisburg, Tennessee when the Griffins were not only raising a special needs child, but also running their own business.

“We owned a hair salon called CW Cuts for many years in Tennessee,” Wendy said. “Bubba stepped away from work to help Brody full time. We quickly realized that we were going to need extra help and a service dog made the most sense.”

The Griffins’s son Brody was diagnosed with Fragile X syndrome and autism at an early age. The Griffins’s said Brody couldn’t be left alone for more than two minutes before using a service dog.

“The total cost of getting the service dog was $6,000,” Wendy said. “Bubba was able to raise all of the funds just by selling his jewelry. Milo was Brody’s service dog and was absolutely wonderful. Milo was able to stay with and keep Brody safe for long periods of time if needed. It was a true blessing.”

As happy as the Griffins were to have Milo, they were also intrigued at the possible business they’d stumbled upon. The couple was also familiar with Marshall County from camping trips at Mountain Lakes in Guntersville. They decided to move to Guntersville in 2010 after selling the salon.

“It started out as just earrings and we sold them inside Wendy’s shop back in Tennessee,” Bubba said. “They really took off, so I decided to start making several other kinds of jewelry. It’s become extremely therapeutic for me to sit and design this kind of jewelry.”

The Griffin team works like a well-oiled machine. Wendy shops for gems, beads and other items needed to make the jewelry, and Bubba dishes out the final product. From a backroom shop in his garage, Bubba churns out items that are being purchased near and far.

“We’ve been selling our products online through Facebook Live and it’s been very successful,” Wendy said. “The pandemic has obviously made us have to do that, but we were actually prepared. In March of 2019, we had an showcase get ruined by weather. So, we just started selling products online and it really took off.”

Lucky Buck Jewelry holds showcases every Wednesday and Sunday night beginning at 7 p.m. Wednesdays are “Wednesdays with Wendy” and Sundays are “Bubba’s Roadshow.”

Lucky Buck Jewelry offers everything from necklaces to earrings and bracelets. The Griffins said they’ve sold products to people in the Virgin Islands, Texas, Pennsylvania and many other locations.

“Just this year we’ve sold a little over 8,000 pieces,” Wendy said. “It’s really been incredible to see. It all goes through Bubba who is so humble and so talented at the same time.”

Bubba admits his interest in art hasn’t always been present. However, in the past 14 years he’s found it to be a passion.

“I can spend a solid two hours working on jewelry,” he said. “I’ve learned how to just by watching videos and reading articles. It’s so relaxing to create something and just think about what I could do next. I’m just happy people have enjoyed it so much.”

The Griffin’s now have four children and the family is “all in” on the jewelry business.

“We’re looking to expand our shop space soon and grow the business as we see fit,” Wendy said. “This is something we’re all very proud of. It’s a business that came out of necessity and I’m just so thankful we’ve had this kind of success.”