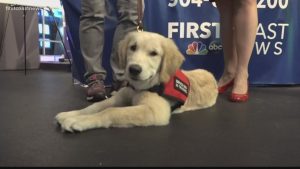 A First Coast nonprofit known for serving disabled veterans by providing them with service dogs is branching out to serve three local police stations in need of canine companionship.

K9s for Warriors, based out of Ponte Vedra Beach, wanted to give back to others who selflessly serve in uniform. That’s why they’re holding a ceremony in Jacksonville Beach to donate three dogs to the Neptune Beach, Atlantic Beach and Jacksonville beach police departments.

The dogs are Jamie, going to JBPD, Duke, going to NBPD, and C4, going to ABPD. They will be referred to as “station dogs” in their new homes, K9s for Warriors said in a news release.

The donation ceremony began at 10 a.m.

The dogs will provide a benefit to the department, but the donations will also provide the dogs with a new supportive family environment to ensure a mutually beneficial companionship.

The Police Executive Research Forum reports that police departments “are now facing a crisis in their ability to recruit new officers.”

“K9s For Warriors knows the positive power that the companionship of a dog can bring to those who most need it,” said K9s for Warriors Chief Executive Officer Rory Diamond in a news release. We see it every day in the veterans we help heal through this companionship and it is so rewarding for K9s to be able to provide these station dogs to serve our local police.”