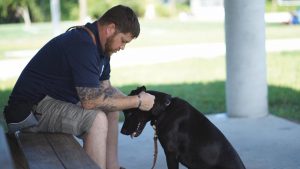 When veterans come home from battle, transitioning back into civilian life can be a daunting task.

On average, 20 veterans die from suicide each day, according to the U.S. Department of Veterans Affairs. But groups like K9s for Warriors are working to bring that number down by training service dogs to help veterans cope with the physical and mental scars from service.

“I’m a graduate of the program in 2015 and I came back and I started working here and I can see how this program affects the warrior and their family,” said Greg Wells, Manager of Programs with K9s for Warriors.

The program has been able to continue its work through the pandemic, training 90 dogs and pairing them with veterans.

Working at a limited capacity has come at a cost.

The program’s wait time has doubled from two to four years, with 391 veterans on the waitlist.

“Our biggest fear is to lose a warrior on our waitlist. Our warriors, 82% of them have attempted suicide before they come here and we have an almost perfect record in stopping it after a warrior comes here, but we’ve got to get them through our doors first,” said Diamond.

But the program has plans to expand to meet the growing need.

“We’re going to break ground next year on what we call a ‘Mega Kennel’. The world’s largest rescue dog training center. So we’ll get much more dogs like Angel here through our system,” said Diamond.

K9s for Warriors is 100 percent free to veterans and while the Florida Legislature approved $600,000 for the program this year, private donations provide most of the funding.

K9s for Warriors has a 10-year history of helping veterans and currently operates in 47 states.

In that time it has trained and paired 641 service dogs with veterans.