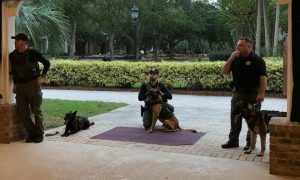 Five K-9 officers in Jasper County recently received gifts to help protect them while they are on the job.

Blue Line Tails, an organization established in March by Michael Messer, got a $7,700 donation in August from the group 100+ Sun City Women Who Care that paid for five body armor sets with patrol collars.

Andrea Hoerner, one the Sun City group’s founding members, said it has given away more than $67,000 in donations. At their quarterly meetings, members can nominate any local nonprofit to receive funds. The group votes on which charity will receive the donations.

“Each member writes a check directly to that charity,” she said. “Member Vicki Mack nominated Blue Line Tails after she met Messer and his K-9, Grimm, at Lowe’s where she works part-time. She was really impressed with what Messer was doing and their need for K-9 vests.”

Messer has been with the Jasper County Sheriff’s Office for four years.

“I started Blue Line Tails because I saw a lack of help for service animals,” Messer said. “Law enforcement agencies have budgets and many of them are limited as to what it can provide to its service animals.”

“My wife and I started Blue Line Tails with the goal to make a difference,” he said.

On Nov. 9, the five teams receiving new gear returned to Sun City to meet with some of those who donated to the cause.

“When Michael returned to our November meeting — his charity was nominated in August — he brought four other K-9 officers with him with their dogs,” Hoernersaid. “All with their vests. The ladies were so appreciative to be able to help out.”

“God is good and I am grateful he placed a group such as this in our path,” he said.