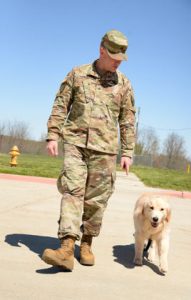 Golden retrievers Molly and Perry and black Labrador retriever Jersey, new additions to the Joint Regional Correctional Facility’s Dog Handler (Canine Assistance Rehabilitation Education and Services) Program, wait in the back of a CARES van April 21 in the Visitor Control Center parking lot. Three dogs ready to transition from the JRCF program to the next phase in their training to become service dogs were exchanged for three new CARES dogs ready to begin their phase in the JRCF program during a meeting with the CARES program founder April 21. CARES is based in Concordia, Kan., and has several prisons that participate in the training program. Photo by Prudence Siebert/Fort Leavenworth Lamp.

Since then, not only have the very first program dogs labradoodle Jericho and yellow Labrador retriever Vizer — graduated from the JRCF program and gone on to receive more specialized training and be assigned to an owner, but now 12 others have, too.

In exchange, three new dogs — golden retrievers Molly and Perry, and black Labrador retriever Jersey — will join the other five dogs still being trained at the facility.

When the dogs arrive at the JRCF they range from 8 weeks to several months old, which wasn’t the case in the beginning when only older dogs entered the JRCF program, but Sgt. Christopher Samson, Dog Handlers CARES Program noncommissioned officer-in-charge, said adding puppies into the program has gone well, and the program has only continued to expand.

“We definitely had to figure out some logistical issues at first, but we … figured out the issues we were going to have and got it all smoothed out,” Samson said. “Now we’ve actually expanded more. Before dogs were only on our agriculture program, and since then we’ve moved on to having one dog in our library detail and one more dog is in our textiles program. Slowly we’re starting to spread them out, so they can be all throughout on different vocational programs throughout the facility.”

The facility is also taking on dogs that have completed their basic training at other facilities and are waiting to move on to their next phase of training.

Samson said more expansion is expected in the future with an increase from eight dogs to 12, which will allow more inmates to participate in the program because each dog has one handler and one alternate.

Holbert calls it a win-win situation.

“It gives the inmates a purpose and they will tell you by far it is one of the best jobs in the facility,” Holbert said. “I have several guys that have been in it for years that have told me that it has affected the way that they parent, the way that they interact with their wives or significant others because they learn correction and praise, they learn communication skills and nurturing that maybe they didn’t have before.

“For us, we have puppies or dogs that go in and they are with their person 24-7. They get the basics down and that is just critical because what dogs learn in the first 16 weeks of their life stays with them, and that’s the foundation for their life,” she said. “If you have a dog that’s in a kennel until they’re six months old, you’ve lost a very valuable window of time to work with them and imprint on them, and these dogs as working dogs, that’s how they’re life is going to be. It is going to be 24-7 with their person, so that part of it is really important, and it gives us a great start.”

The JRCF is one of seven facilities in the United States that CARES partners with for the basic training of service dogs. Services the dogs are trained for upon learning the basics include mobility service; medic alert for conditions such as diabetes and seizures; therapeutic service for conditions such as autism and post-traumatic stress disorder; and professional therapy where the dogs work alongside doctors, counselors and other professionals, Holbert said.