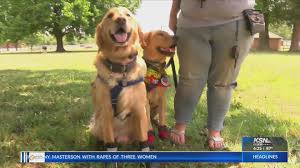 While they may be cute, they have a very important job to do.

One Joplin service dog handler wants the community to know the do’s and don’t when you see a service dog out with their owner.

Amber Chrystler and her two service dogs, Clark and Kent, help her complete tasks in her day to day life.

Chrystler says the jobs of these animals aren’t always understood.

“Clark does deep pressure therapy, he does what’s called crowd control, and that’s when I’m in line and people get really close and it makes me uncomfortable so he’ll do blocks and covers and he’ll stand in front and behind me.”

Businesses are not allowed to refuse service to those with service animals, however there are some questions they may ask.

“Is this dog a service dog due to a disability, and then what work or task is it trained to perform.”

And businesses like Blue Moon Boutique in Joplin are already very familiar with allowing service dogs into their store.

Branden Clark, Co-Owner, Blue Moon Boutique, said, “Make sure employees always know, and typically they do. And just make sure everybody is informed and educated about it.”

Knowing those guidelines are especially important for people like Chrystler, as she needs to bring her dogs everywhere she goes.

“I really think it is important especially because a lot of people unfortunately do fake service dogs and that’s a legitimate concern I have and I run into daily. So, that would be my thing, I think they all need to be educated,” said Chrystler.

Chrystler adds never pet or distract a service animal while they are working with their owner.

Chrystler also runs a Facebook page aimed at informing the public on service animals, called Show Me Your Service Dog.