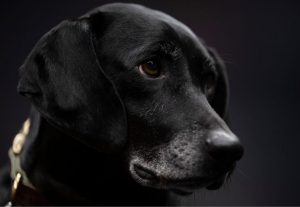 Upon a first meeting, Jimmy rushes over to a stranger, bestowing incessant kisses before setting himself down to cast an intent stare, seemingly into the person’s soul.

Jimmy’s deep brown eyes send a message that he cares; the premature grey on his face signals he understands what you’re going through, despite how terrible it is.

After all, he’s been there himself. Abandoned at a young age and later found emaciated, Jimmy narrowly escaped death at a high-kill animal shelter in Missouri.

Now, Jimmy has a new life and purpose, bringing comfort to crime victims and their survivors at the Ocean County Prosecutor’s Office.

Jimmy is a 3 1/2-year-old hound mix who is one of the prosecutor’s newest staff members, assigned to the victim-witness unit. As a therapy dog trained to sense when a person is under stress, his job is to put crime victims at ease when they come into the prosecutor’s office to talk about their cases.

“If you sit on the floor with him, he will lick you and just love you all up,’’ said Carol Froberg, Jimmy’s co-handler and victim-witness director for the Ocean County Prosecutor’s Office.

In that capacity, Jimmy will be blazing a trail in New Jersey.

As such, Jimmy joins more than 200 therapy dogs working in courthouse settings or at prosecutor or district attorney offices nationwide, Froberg said.

“I’m happy to be breaking this ground in victim-witness advocacy,’’ said Ocean County Prosecutor Bradley D. Billhimer, adding that on his second day on the job as prosecutor in October 2018, Froberg approached him about getting a dog for the victim-witness unit.

“Working here for so long with victims, we wanted to do something extra for them and make the process a little bit less difficult for them, if that’s even possible,’’ Froberg said.

“You’re starting to see therapy dogs everywhere in schools,’’ she said. “Any time there’s a mass shooting, they bring in therapy dogs just because of the impact that they have on victims. We wanted to do something like that here and make the process a little bit easier for (victims.) It opens up communication. It’s a distraction for people. It lets them be a little less nervous and, that way, they can tell their stories better if they’re a little more calm.’’